The Hobbit : An Expected Journey - Chapter 6

October 04, 2015
Wherein our party completes their Great Escape (only, with less motorcycles and Nazis).  Out from the goblin warren, and right into another pretty pickle, before flying off with the birds. 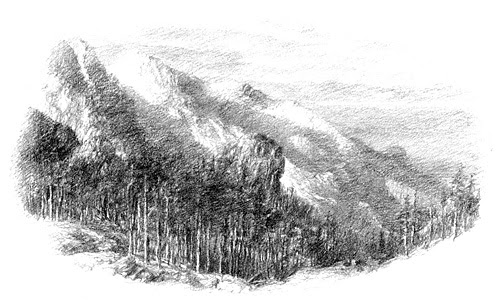 In this chapter we're treated to not just evidence of Bilbo's growth, but some actual characterization of the numerous dwarfs that he travels with.  With so many dwarfs they become a bit nameless, blending into Thorin & Co.  Here we get dialog and bits of personality, and even Thorin calling on Dori to give Bilbo a hand.

Going back to Bilbo's development, the hobbit we met at the start of the book was not someone capable of coming to the conclusion that it was his duty to walk back into danger to save his friends, let alone act on that feeling.  This is a landmark moment in Bilbo as a hero and adventurer, and from this point on we'll see him to start to take ownership of the situation and become more and more important to how events fall out.  He's still misses his comforts of home, but our hobbity friend starts living up to Gandalf's expectations, and perhaps even surpassing them.

Tolkien also takes steps to connect The Hobbit to our world through language.
"Escaping from goblins to be caught by wolves!" he said, and it became a proverb, thought we now say "out of the frying-pan into the fire" in the same sort of uncomfortable situations.  This sort of connection we lose in the translation to film, where perhaps there is a desire for a disconnect from this fantasy world and our own. Tolkien also uses language for little flourishes of detail that draw us in, not only in expressing the actions and feelings of individuals, but for whole groups through song.  We've had music in the story from the dwarfs, the elves, and the goblins, each expressing a different cultural personality.  The dwarfs have a lay about their lost land and gold, the elves have a song that sounds silly but reveals that they know more than they should, and the goblins have music that shows their delight in cruelty.  The goblin music again takes the stage here, as they gleefully sing to our party of adventurers.  The first song is truly horrible to the dwarfs as the goblins sing about cooking and eating them, but in the second song we get music similar in cadence and sound to the music of Chapter 4.  Chapter 5 itself lacks music, but the riddle game that Bilbo plays with Gollum could stand as substitute, with tricky, slippery thinking being a clear personality trait of Gollum.


My feelings on the movie interpretation for Chapter 6: blah, blah, heroic balderdash and action driven plot.  Overly dramatic Thorin is overly dramatic.  Also, where is the music?

Now don't get me wrong, I actually think Richard Armitage is an amazing Thorin.  But the point of this section seems to be Drama.  Thorin does a bit of badmouthing of Bilbo (nothing new here, and this is true to the spirit of the general feeling about going back for Bilbo in the book), learns that his nemesis is alive (and somehow able to teleport over mountains), flails really ineffectually at said nemesis, and dramatically nearly dies.

We've also got an almost hysterically compressed timeline for how long it takes on screen.  It's important to note that in The Hobbit they lost several days with the goblins:


"You lose track of time inside goblin-tunnles.  Today's Thursday, and it was Monday night or Tuesday morning when we were captured."

After this huge shortcut in traversing the mountains, they journey away, and then take refuge in the trees when they hear the Wargs approaching.  We're talking several hours of travel, and then a significant time waiting in the trees that is compressed into an oddly drawn out half hour standoff (might I even accuse the dwarfs of hanging around?) before the eagles save the day.

In the film, the Wargs are present not on their own agency, but there as the mounts for the White Orc and company, and somehow they've all gone from well behind the dwarfs to right behind them.  Even with their goblin alliance I'm a bit dubious about that traveling speed.  As for the Wargs themselves, I liked them as intelligent, scheming creatures.  And why do they so strongly resemble hyenas?  Is it because they were afraid over-sized wolves would make us think of Twilight?

Then to cap it all off Gandalf saves (restores?) Thorin's life, which Thorin follows up with giving Bilbo some mixed messages leading into a fond acceptance of the hobbit into their fellowship.

And, the part that made me *squee* in the theater, a teaser of Smaug.

What I did find most interesting about the film, is that Gandalf clearly not only knows that Bilbo is hiding something, but that he just as clearly does not want the dwarfs knowing about it.  We don't get the recollection of the riddle game, and when the dwarfs want to know how Bilbo got past all the goblins they are brusquely cut off by the wizard.
literary analysis Silmarillion Blues