Showing posts from December, 2014
Show all

It has to get better eventually

December 31, 2014
2014 was not a good year.  Almost as a common experience, the year was rough for most people I interact with regularly.  Emotionally, 2014 broke something in me, and I'm trying to hold the pieces together long enough to heal. There's no real short way to summarize the events of the past year beyond overwhelming and chaotic. I started the year newly unemployed, after a brief tenure in a fantastic new job before the position was suddenly eliminated a week before Christmas.  The library employment market, particularly for a technology focused librarian, is limited.  Even non-professional library employment postings receive 70-100 applications, many from MLS graduates.  On the bright side, I started securing bits of variable employment here and there, and if push came to shove, I could live off my savings for some period of time. Then my partner's grandfather was diagnosed with pancreatic cancer and in February my parent's home suffered from a chimney fire.  I started
Post a Comment
Read more

December 24, 2014
Liesmith : Book One of The Wyrd / Alis Franklin Working low-level IT support is far from a glamorous job, no matter how prestigious the company.  But it's a job that pays well, offers regular hours, doesn't require much navigation of social niceties, and allows Sigmund the time to enjoy the games that he loves.  What he doesn't expect is the chain of events set off when he fails to recognize the company CEO and shows him the Norse-inspired game he's been creating.  Then the the charming, witty, and incredibly cute Lain shows up as the new guy in IT, and of everyone there, he attaches himself to Sigmund. Things start changing for Sigmund, and some of them good.  He's surprised at his attraction to Lain, and even more that it's returned.  But other changes are a bit weird.  Or perhaps it's more all "wyrd" as things start going down in an old god sort of way. At first blush Liesmith strikes me as a queer YA (and Australian) spin on American G
Post a Comment
Read more

[Book Review] We Are All Completely Fine

We Are All Completely Fine / Daryl Gregory ( Powell's Books ) What happens to the surviving victims after the monsters have been thwarted?  Life in shambles, friends dead, and scars from an experience that no one would believe.  How do you go on knowing that the monsters are real? Dr. Jan Sayer seeks out the survivors for reasons of her own.  Stan, once a minor celebrity after his rescue from cannibals, now a maimed old man treated as a nuisance.  Harrison's experiences in Dunnsmouth were immortalized in books about a child monster killer.  Barbara is haunted by a message literally etched on to her bones.  Martin only ever views the world through his sunglasses, a filtered augmented reality.  Greta's entire body is a canvas of symbols carved into her skin. There is something almost painfully intimate about this story.  We're learning about these deeply damaged individuals not through their life or as they surmount challenges, but largely through a series of group
Post a Comment
Read more

December 16, 2014
Revealing Ruby / Lavinia Kent I previously reviewed Mastering the Marquess by Lavinia Kent, so I had a fair idea of what to expect in terms of how hot and heavy the story would get. Madame Rouge runs a discreet, high-end brothel for customers of discerning tastes and needs.  She takes care of the women in her employ, and tolerates no mistreatment by her patrons.  One of the rules of the brothel is that as its proprietress, she is not on the menu, lest the power dynamic she holds is disrupted.  That doesn't mean Madame Rouge never has interest in the men who come calling at her establishment.  And Captain Derek Price definitely whets her appetite. The attraction between the two is palpable, but Madame Rogue does not take customers.  However, maybe he's worth being herself with for once. I will admit, in some ways Revealing Ruby was tamer than I expected.  Mastering the Marquess is full of longing and passionate kinky sex.  Revealing Ruby stays on the vanilla end of
Post a Comment
Read more

Guest spot on Letters to a Young Librarian

December 11, 2014
I reworked an earlier post/presentation for the Letters to a Young Librarian guest post, " Adventures in turning it off and back on again. "
Post a Comment
Read more

What's a weekend without a little madness? 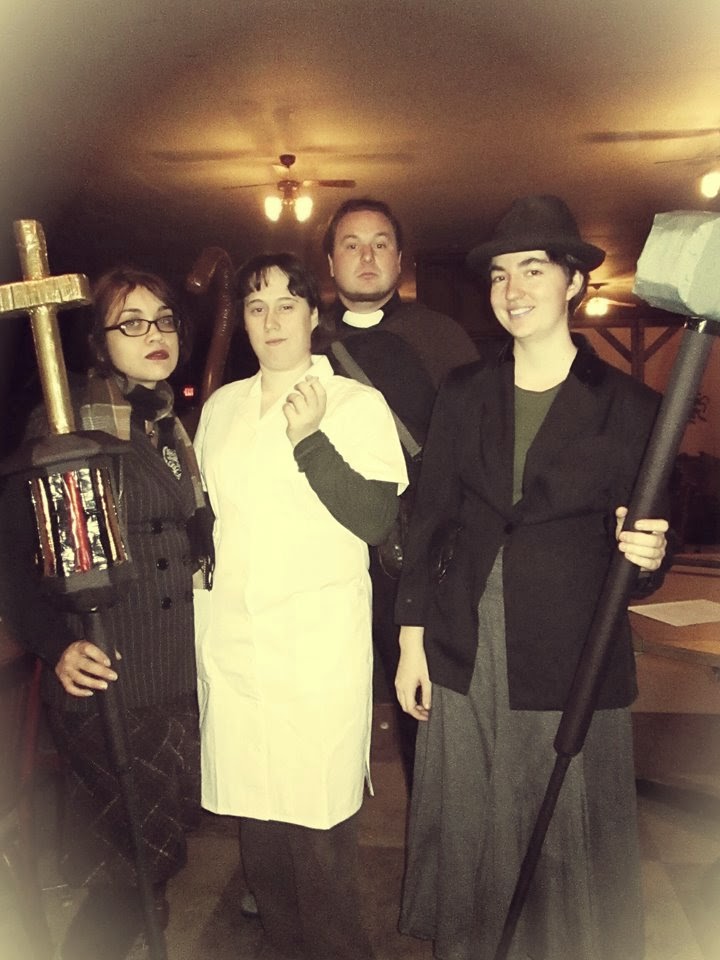 I've written before about LARPing .  It's loads of fun and a great way to meet new people. My first LARP occurred two years ago, and myself and three of my friends played a group of experts from the Vatican (well, I was there as medical support) searching for holy relics rumored to be hiding in Hungary (in particular the original top of the Holy Crown of Hungary). Just your average team of Vatican treasure hunters So it was that we, along with nearly 40 others, were traveling in December of 1935, only to be trapped in a mountain valley when sabotage knocked the train off the rails.  A valley scheduled to for flooding in two mornings.  Over the next 36 hours we found strange artifacts, encountered cultists and ghouls, were decimated by horrifying creatures from another dimension, and desperately tried to find what we needed to repair the damage to the rails in order to escape. Ten of the original forty escaped, including one of ours.  All with scars and terrors haun
Post a Comment
Read more

December 07, 2014
A SEAL Wolf Christmas / Terry Spear To start off, this is exactly the sort of romance novel (paranormal or not) I'm embarrassed to be caught reading.  I wouldn't have picked this up on my own, and really only did so as it was a book club pick.  If you are into books that have titles like A SEAL in Wolf's Clothing (admit it, you probably read it as "a seal in wolf's clothing" and giggled), A Highland Wolf Christmas (kilts AND werewolves), Call of the Cougar (were-cougars, not older women chasing significantly younger men), Jaguar Fever , and the like, you will probably like this book (and other titles by Terry Spear). I didn't.  But then, I'm not someone who generally sees a book like this and says "hot damn, I have got to read this."  Exceptions standing for books involving Librarians for amusement reasons and review copies requested at 3AM.  I really can't defend many of my 3AM review choices. Official teaser text for A SEAL in
Post a Comment
Read more

Dust / Elizabeth Bear ( Powell's Books ) I don't even really know where to start when summarizing this book.  I find it a fantastic blending of fantasy and science fiction.  To me the story starts out reading like high fantasy and then slides it way into high technology speculative fiction.  The story explores concepts of humanity, gender, religion, belief, society, and science. I cannot think of a single way to review or summarize the book without any spoilers. "Can an angel be imperfectly honest?" "An angel can be whatever it is created to be," Samuel said, with perfect frankness.  "Humans are the only animals that intentionally, methodically change themselves." Dust takes place on a generation ship, stranded in space for centuries.  Launched from Earth by fanatical Darwinists seeking to push the bounds of extreme, forced evolution using the ship as an petri dish.  Society is split into Means and Exalts, Engine and Comm.  The ship is t
Post a Comment
Read more

Reading Privacy Enables Reader Sharing On privacy and e-reading. If your website still uses HTTP, the X-UIDH header has turned you into a snitch About privacy, HTTP/HTTPS, and online tracking. Preventing Digital Decay A lot of people are shocked that as a relatively technology savvy person and as someone under 30 that I think microfilm is awesome.  The reason I think microfilm is awesome is for all of its limitations it is a stable method for archiving. I'm really glad that the challenges of digital preservation are getting more attention.  The fact that you cannot rely on just shoving a photo somewhere on your hard drive and expect it to be readable in 10 years is really important for people to be aware of. Internet Speculative Fiction Databse A FANTASTIC resource for fans of Science Fiction, Fantasy, and other related genres that fall under the Speculative Fiction umbrella. War Ink : See Their Ink.  Hear Their Stories "The War Ink virtual exhibit is a partner
Post a Comment
Read more

Otherworld Nights / Kelley Armstrong ( Powell's Books ) While I read a lot of urban fantasy/paranormal there are few series in the genre that I enjoy as much as Kelley Armstrong's Otherworld novels.  I stumbled across Bitten by chance when browsing for something new to read in the Science Fiction/Fantasy section of a used book store over a decade ago.  First I met Elena Michaels and the Pack, then Paige Winterbourne, and others, eagerly waiting for the next title in the series to come out. The challenge of loving this world is the number of short stories and novellas, the former scattered through genre anthologies and the latter often published in limited runs through specialty imprints. Otherworld Nights is a fantastic collection of stories enriching the world of the Otherworld.  They take place over the whole span of the novels, and across the entire cast of characters. I highly recommend this for fans of the series.  If you haven't read any of the novels but lik
Post a Comment
Read more

Going to Arisia? Come hear me talk about books!

Strong Female Protagonist : Book One / Mulligan, Brennan Lee and Osterta, Molly What happens when the "super heroes" and "arch villains" step back from their battles and ask "what am I doing?"  Who is damaged in the fall out of the crimes the heroes stop?  Are they actually making the world a better place? For years, teenaged Alison Green fought crime as Mega Girl. Super speed and strength, flying, and impervious to damage.  Then a villain showed her a possible conspiracy, eliminating the nascent "biodynamics" with powers to literally make the world a better place, while leaving others.  How does the ability to beat up a giant robot matter in the larger scheme of things?  Alison is now trying to learn who she is beyond a "super hero," try to find a way to actually make the world a better place, and to figure out what it means to do the right thing. strongfemaleprotagonist.com Strong Female Protagonist started out as a webc
Post a Comment
Read more
More posts