Showing posts from January, 2017
Show all

January 30, 2017
This weekend left me utterly wrecked, but in a good way.  The second game in a LARP I staff went off fantastically, but like anything that takes significant personal energy and emotional investment, it's a little rough when it ends.  Totally worth it, though coming back to the current political dumpster fire is adding a gut-wrenching anxiety flare to the post-event crash and recovery process. My Sunday LotR post clearly didn't happen, and I'm not sneaking it in today. I have a back log of stuff (including writing about Arisia) that I will get to soon. But not today.  Today is for recharging and readjusting to real life.  And quite possibly naps.
Post a Comment
Read more This chapter can largely be viewed as two sections; the first part consisting of reunions and filling in backstory, the second part looking forward at hard decisions and action.  The reunion of the fellowship stands as a focal point to pull us in at this juncture, some joy taking part in this brief calm. The real action of the chapter however is decision.  Denethor has good reason for his despair, the seeing stones do not lie... and the fight they all face against the shadow will not be won by strength of arms alone.  In terms of the narrative of the page, their hopes rely mostly on the shoulders of two hobbits.  In a more layered take, the battle they face isn't just that of weapons and physical force, but of psychological maneuvering and propaganda.  Sauron has relied on feeding misinformation and doubt to those who stand against him, now the opposition seeks to do the same to him. By and large, the updating details supplied by the fellowship members to each other in thi
Post a Comment
Read more

Dreadnought (Nemesis #1) / April Daniels Danny Tozer tries to stay under the radar, right now that's the easiest way of surviving and staying sane.  Then the world's greatest superhero is struck down and passes his mantle to Danny.  When young men have taken on the mantle of Dreadnought they've physically changed, becoming taller, stronger, more to their ideal form.  Danny takes on the mantle and finds herself for the first time in her life in a body that matches who she is... only everyone else still remembers Danny as Daniel.  Now when she should be learning what comes with these superpowers and stepping into the void left by the previous Dreadnought, she has to deal with suspicion, disgust, and all the baggage of being seen as an attractive young woman.  She has to get a handle on things fast, because she may be the only one capable of stopping the cyborg Utopia's plans. I started reading this book with high levels of both excitement and reservation.  Kickass
Post a Comment
Read more 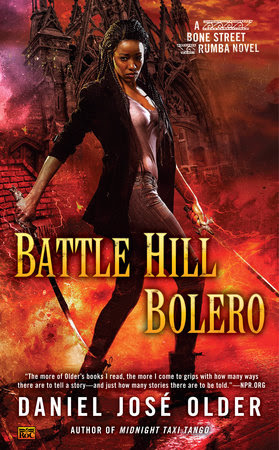 Battle Hill Bolero   (Bone Street Rumba #3)  / Daniel Jose Older This book. This fucking book. I just can't even come up with the words to review it, so please bear with me. Battle Hill Bolero  is angry and joyous and lyrical and triumphant. Book one was good, book two was great, and this book is why you read the first two.  To get to this glorious point.  If it's been awhile since reading Half-Resurrection Blues  or Midnight Taxi Tango , take the time to reread them before diving in to Battle Hill Bolero .  Get back on first name basis with the characters.  The book dives forward and takes no prisoners. Advance Reader Copy courtesy of Roc (Penguin RandomHouse) in exchange for an honest review; changes may exist between galley and the final edition.
Post a Comment
Read more

January 16, 2017
A chapter titled "The Houses of Healing" stands as breathing space for the reader and the characters.  Men start cleaning up and repairing the battle damage, friends reunite, wounds are tended, and legacies unveiled. Coming into Gondor, Aragorn chooses caution rather than claiming his power, respecting the long sovereignty of the Stewards.  It is here that they find both loss and hope; Denethor gone, Theoden lying upon a bed of state, but Eowyn and Faramir lying in the house of healing.  The shadow of Mordor is long, one that inflicts wounds beyond even Gandalf's power and knowledge, but ones that may be cured by some nature within a King. Aragorn's unusual life as an uncrowned King perhaps gives him a unique modesty and self view.  In the high tongue he admits to beign known as the Elfestone and the Renwer, but the name he claims is one often applied to him in mockery, that of Strider.  We've seen him all along take the mantle of leadership, but as part of hi
Post a Comment
Read more 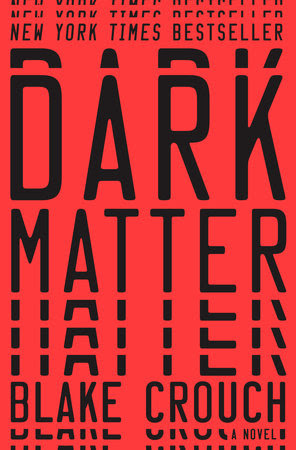 Dark Matter / Blake Crouch Jason Dessen has a good life.  Not the life he once foresaw for himself, that of a brilliant research physicist.  But he's married to the love of his life, well employed, and has a wonderful son.  Then a masked man assaults Jason, takes him outside of town, drugs him, and when Jason wakes everything has changed.  He's still Jason Dessen, but his work in quantum physics was never set aside for a family, the his son never born, the woman he loves is dating his best friend and is a celebrated artist, and the man everyone believes him to be has done the impossible.  But some mysteries should never be broken open, and everything is now at risk. Ok, here's the thing.  I wanted to like this book.  Alternate-universe, hard science fiction thriller?  Sounds amazing .  It's not a bad book, though I find it works better as audio rather than print due to a narrative style favoring short, abrupt phrases.  But I ended up bored (and to be honest, a
4 comments
Read more

January 08, 2017
What strikes me the most here is the differences in gravitas and tragedy between the two versions of the same scene.  While at their core, the same basic events occur, but their executions turn them into completely different events. Watching the film, we know explicitly that this scene is coming, being led to it step by step.  In the book, something is clearly long, but we're left with a more ambiguous dread before being whisked off to other battle scenes.  Pippin is sent away and on his way to the big guns (ie. Gandalf) starts putting things in motion to delay permanent consequences.  After all, he knows Faramir still lives, and has a much less regimented place within the hierarchy of the city guard. The choice to save Faramir is not without cost, Gandalf makes a choice to save one man over helping on the battlefield.  The battle still rages on, no matter the order that we come across the chapter in the text.  The decision on some levels is that of visual effect - the potenti
Post a Comment
Read more

January 07, 2017
It's that time of year again, when I put out a list of 11 books to read and discuss over the upcoming months, and hopefully folks will join in.  This year I have two Finnish authors (plus one Russian), a few SF/F classics, and two repeat authors from previous years. On my own, I've previously read The Core of the Sun , Old Man's War , and Grass , though the last two I only vaguely remember.  The vagueness of memory is honestly what prompts this re-read of Old Man's War , and I want to look at it this time with Starship Troopers  in mind.  I actually wanted to take a look at Sideshow  by Tepper, but as it turns out to be the third book in the series started by Grass , and I barely remember anything  about any of the three, I wanted to start in the beginning. The other books were all chosen based on reviews specific to that book, or based on a desire to read something by that specific author.  It would be a good year to reread The Handmaid's Tale , but with The Co
Post a Comment
Read more

Hard Rhythm (The Secrets of a Rock Star #3) / Cecilia Tan Previously Reviewed Taking the Lead Wild Licks Set revolving the band and the kink club we've come to know in the previous two books, Hard Rhythm follows hostess Madison and drummer Chino. Unfortunately, this is probably my least favorite of the series, little details just bothered me and I don't generally expect my favorite parts of an erotic romance to be the ones that have nothing to do with the relationship or sexy times.  That being said, it's a pretty good series overall. Ironically perhaps, I felt the public D/S scenes were just too showy for me to even enjoy reading about.  Yeah, I get where that's sort of the point of a public show, but they felt like just show and no substance.  I also felt we were a bit teased by a chance of a relationship with Madison as the dominant, or some element of switch.  The story opens with her thinking about Chino submitting to her, then turns into her regu
Post a Comment
Read more

Upcoming, but not New Year's resolutions

January 01, 2017
I hope everyone had the type of New Year's celebration they wanted. There is no LotR chapter today, my partner in crime has had a hell of a last week of the year and declared this week a hiatus.  We'll continue with Return of the King next week. Romance Book Bingo starts today.  Thank god, I have a stack of romance novels from the library that I've deliberately not read, and usually they're next day returns.  There's definitely a few squares that I'm not going to actively seek out filling, but if I come across them I'll go with it. Coming up in a few weeks is Arisia, I'll be moderating two panels on the 14th and spending the rest of the convention largely in the background of things. Disability in Speculative Fiction, Saturday, 2:30 PM SFF doesn't always represent people with disabilities well. A flawed model for dealing with disability in SF is that technology is a panacea that can be always, desireably, and often preemptively applied t
Post a Comment
Read more
More posts