Showing posts from July, 2016
Show all

Bloom County Episode XI: A New Hope / Berkeley Breathed ( Powell's Books ) I remember reading and re-reading my stepfather's volumes of Bloom County  and all the antics within.  For me they were the next reading step from Calvin and Hobbes , a mix of seriousness and irreverence that I may not have always understood, but I certainly adored.  Jokes that I didn't get I strove to understand, and sometimes the strips weren't jokes but reflections on life itself. When Breathed relaunched Bloom County  via a Facebook page I was among the hordes of excited fans.  I was also better situated to understand more of the layered (and sometimes not so layered) humor within the strips. I haven't read all the strips he's published on Facebook thanks to limiting algorithms and limitations of form factor (if I'm on my phone it's a significant hassle to read them).  The fact that he's publishing them as a book excited me to no end. Bloom County Episode XI: A Ne
Post a Comment
Read more

[Book Review] The Book of Phoenix 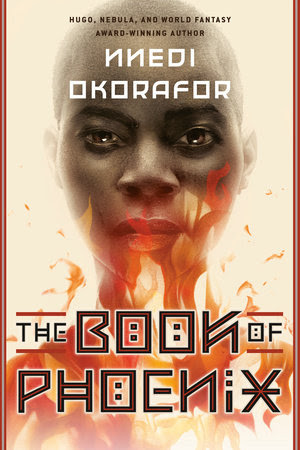 The Book of Phoenix / Nnedi Okorafor This is a book about the hubris and folly of mankind, of a desire to live free, and the birth of myth and religion. A man in the desert stumbles across a treasure trove from the past.  A cave full of computers and a remnant power source that somehow survived the scouring of the earth so long ago.  And the memories of a unique woman that was at the epicenter of it all. Tower Seven made up Phoenix's whole world.  By all appearances, a 40 year old woman of African descent and voracious intellect.  But appearances can be deceiving.  As a SpeciMen, deliberately conceived, with accelerated growth, and living her whole life under intense study, the world does not recognize her as human.  Perhaps that is how they so overestimated their control over her, her acquiescence and submission to their rule.  In the end she became the apocalyptic monster, but only in response to repeated brutality, lack of respect of life, dehumanization, and loss. In
Post a Comment
Read more

Lord of the Rings : The Towering Read - Book 3, Chapter 5 Ranger, dwarf, and elf are spooked.  And for various reasons, 'ranger' does get its own label rather than just 'human'.  That Aragorn, as a human, has more vaunted tracking skills than the elf, speaks volumes as to the abilities of the Númenóreans.  Between their various skills, they do a decent job of CSI: Middle Earth, and put together a decent reconstruction of the previous events. Even the dwarf picks up on the... awareness of the forest.  Again, Legolas as a wood elf has not the familiarity to identify the true nature of the Fanghorn, but does have enough to recognize the nature of it.  We get a gentle reminder of the life spans of elves, even a younger one like Legolas.  Fanghorn is enough to make Legolas feel young, while he is old enough to consider Gimili and Aragorn (the elder of the two) 'children.' I'm not sure about the direct use of "Treebeard's Hill."  As a story told in third-person, Tolkien has the ability to reference t
Post a Comment
Read more

Lord of the Rings : The Towering Read - Book 3, Chapter 4 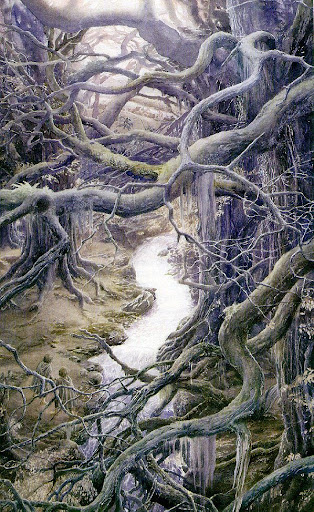 This chapter has been foreshadowed since the very beginning of Lord of the Rings .  Little things here and there, rumors and stories about trees that walk.  Something about the ents has always stood out to me, there's a special place in my heart for the Treeherders, and this read-through the seeds leading up to their revelation really stood out.  Perhaps part of the hook is the fact that even the wood elves are barely aware of ents, relegating them to legend status.  The Treebeard is a being that considers Saruman "young." When Merry and Pippin meet Treebeard we have the meeting of two races that have largely dropped out of knowledge of Middle Earth.  The contrasts between hobbit and ent are pronounced, but both are races with many names and that love green things.  Hobbits can be considered hasty by more than just ents, but I'd argue that they have a similar love of words, language, and speech, just expressed differently.  I love that ent names are stories, the i
Post a Comment
Read more 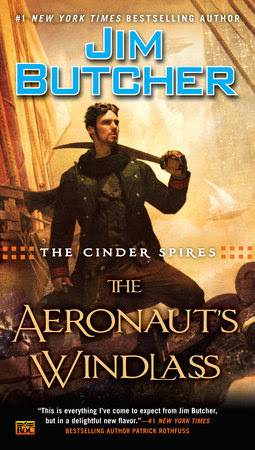 The Aeronaut's Windlass (The Cinder Spires #1) / Jim Butcher I suppose I should start out saying that I may have a bias when reviewing this book, Jim Butcher has been one of my favorite authors for over a decade.  I started reading The Aeronaut's Windlass with incredible levels of excitement and anticipation, even if it took me until now to read it (and that kids, is the downside of becoming a book reviewer, books you want to read but don't have a deadline for become secondary to books you want to read that do have a deadline). I was not let down. Jim Butcher, the #1 New York Times bestselling author of The Dresden Files and the Codex Alera novels, conjures up a new series set in a fantastic world of noble families, steam-powered technology, and magic-wielding warriors… Since time immemorial, the Spires have sheltered humanity, towering for miles over the mist-shrouded surface of the world. Within their halls, aristocratic houses have ruled for generations, devel
Post a Comment
Read more 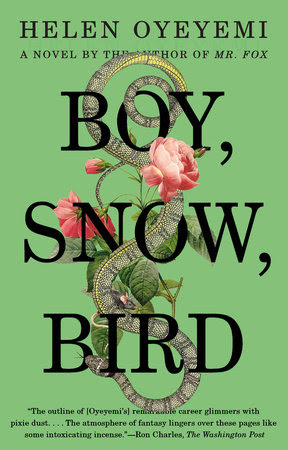 Boy, Snow, Bird / Helen Oyeyemi I tore through this book and then took quite some time to attempt to process it.  In the end I think the best that I can do is to recommend reading this book. The story could be historical fiction, it could be fantasy, but I think classifying it as one thing is limiting.  It starts in 1953 and within a fairy tale laced framework explores race, gender, and the things people didn't talk about except behind closed doors.  With a step-daughter named Snow and the focus on aesthetics, the connection to Snow White is easy to make, but it's not as simple as a re-telling of that well known story. I'm not used to reading stories that tackle the issue of racism so close to where I live, and I think that's unfortunate.  I live in a region with a reputation for being progressive, but sometimes that just means prejudice is better hidden. This exquisite book is definitely worth reading. Discussion Fodder What fairy tale elements did you
Post a Comment
Read more

Lord of the Rings : The Towering Read - Book 3, Chapter 3

July 11, 2016
Merry and Pippin are in a bit of a bind.  In all the confusion it seems our two hobbits ran into a group of orcs, and even Merry separating a number of them from their hands wasn't enough to dissuade the orcs from their new captives. The orcs are quite fractious.  The whole taking captives thing really isn't their bag, but there's also an understanding of politics and power games as they challenge the power of Saruman vs Sauron.  It's easy to forget that orcs are more than mindless marauders, rather than a dark mirror of the elves.  The orcish argument comes to violence, but at the same time there is a call for resolution not simple slaughter.  "Put up your weapons!" shouted Ugluk.  "And let's have no more nonsense!" Pippin demonstrates incredible presence of mind.  In the midst of a full on melee between orc factions he orchestrates the cutting of his own bonds and working to plan ahead.  He knows his dive away from his captors is unlikely t
Post a Comment
Read more

The Invisible Library / Genevieve Cogman I don't deny it, I have a huge weakness for magical librarian shenanigan stories.  Throw in humor and biting wit, and I'm pretty well hooked. Irene has a mission: slip into an alternative London with her new assistant and retrieve a very specific book. Unfortunately, she's not the only one after it, and must deal with warring natives, mechanical contraptions, armored alligators, and a very  dangerous rogue Librarian. The story had me chuckling early on, and is peppered creative and at time grandiose action throughout.  It is also well flavored with steampunk elements without using them to define the story itself.  I look forward to the continuing story. Advance Reader Copy courtesy of Roc (Penguin RandomHouse) in exchange for an honest review; changes may exist between galley and the final edition.
Post a Comment
Read more

Lord of the Rings : The Towering Read - Book 3, Chapter 2 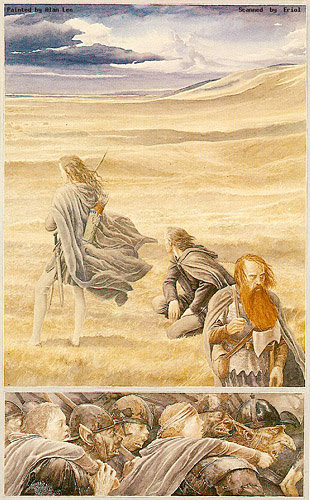 With the party fractured a hunt into to the unknown begins.  Fellowship was the start of the physical journey for this story, but The Two Towers is the start of personal journeys and transformations.  Aragorn is beginning to actually long for his birthright rather than shy away from it.  Gondor is calling, even if self-doubt still has him in a strong grip.  We also get inklings of the intelligence and wit of Merry and Pippin.  And we witness signs of changes in the world at large, one where the Lady Galadriel is considered little more than a fable, that word of Gandalf's passing is met with little woe, and of looming threats and shadows. That the men of Rohan are both cautious and proud surprises me not.  They have as of yet remained free of war and excel in the husbandry of horses like no other.  Wealth such as their herds breeds caution in the best of times, let alone ill time such as these.  Eomer is however an example of nobility and wisdom, catching in that "Strider&qu
Post a Comment
Read more

Awesome titles coming out in July!

July 04, 2016
Ok, so let's be honest, most months have awesome books being published and/or reprinted.  But I happen to get monthly offers to review upcoming new and reprinted titles from Penguin's SF/F imprints.  I'm super  excited about July's reprints, and there's some rather appealing new titles as well. Reprints: Sorcerer to the Crown by Zen Cho This is a book about the triumph of difficult women, and I mean that in the absolutely best way possible.  ( See full review ) The Annihilation Score by Charles Stross (also, The Nightmare Stacks is out!) Dominique "Mo" O'Brien is having a rough time. She wields a soul-eating bone violin (that's trying to take over her will) in the service of her country, things with her husband are on the rocks, there's a sudden plague of humans manifesting superpowers, and she's expected to do something about at least the latter with the help of her husband's ex's. On top of all that, CASE NIGHTMARE GRE
Post a Comment
Read more
More posts