Showing posts from August, 2017
Show all

Silmarillion Blues : Quenta Silmarillion : III. Of the Coming of the Elves and the Captivity of Melkor 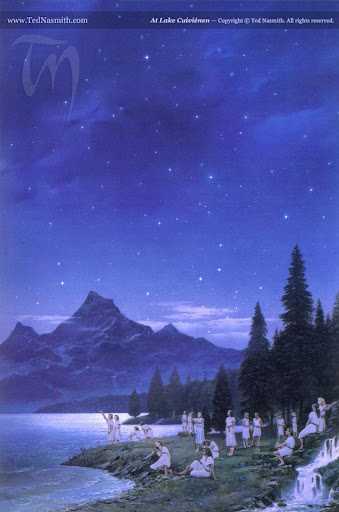 Wherein the Valar largely avoid doing their job, let things get bad, then scramble to make up for it. "Through long ages the Valar dwelt in bliss in the light of the Trees beyond the Mountains of Aman, but all Middle-earth lay in a twilight under the stars." Dwelling in their own private Haven is really not what they were sent to the world to do.  Yavanna moped about, but at least did what she could to protect the life that couldn't grow under the twilight.  Besides that...well, Melkor certainly took advantage of the situation, digging in and fortifying his position.  Most notably we learn about his fortress, Angband, commanded by his lieutenant, Sauron. Finally the Valar realize maybe they should see about that assignment to prepare the earth for Iluvatar's children?  From this we see the greatest of all works of the Valar since they first came to Arda, that is the making of the new stars.  Not fully bringing light to the world, but bringing some... and this
Post a Comment
Read more

August 15, 2017
Valanar to me seems almost a Garden of Eden, but Ilúvatar proves rather more benevolent than Yahweh.  Rather than a forbidden fruit from the tree of knowledge we have the creation of life.  Which by Christian standards and morals strikes me like the larger transgression.  So Aulë so desired Children to pass on his knowledge to that he formed the Dwarves, and Ilúvatar shows compassion in the face of Aulë's demonstrated humility, awarding the Dwarves a place in the world.  Even if that place comes after a long hibernation so that the Elves can still be the First.  I guess the crime in Eden could be considered Pride, a sin Aulë debased himself against. The Seven Father of the Dwarves are laid to rest, to reawaken once the children of Ilúvatar come forth.  Perhaps most interestingly is the Dwarven belief of the afterlife, where they go to their maker's halls, and to serve beside im in the remaking of the world after the Last Battle.  While clearly different, it brings to mind Val
Post a Comment
Read more 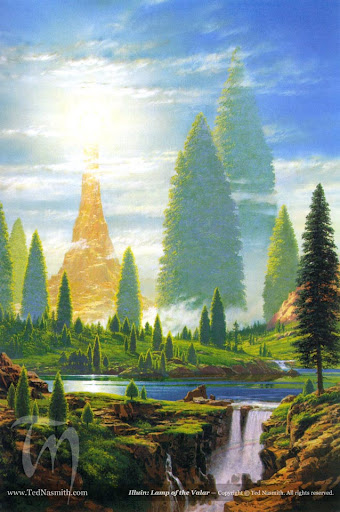 In the early days, while the world was still being formed, a powerful spirit came to the aid of the Valar against Melkor, driving him off with his "wrath and laughter."  And thus did Tulkas the Strong come to reside among he Valar and become one of their number.  It also earned him the life-long enmity of Melkor, but let's be honest if you can face down Melkor, earning his enmity isn't exactly a huge surprise or challenge. Melkor's retreat to regroup and fortify gives everyone else some breathing room, and the Valar take it as an opportunity to tend to the world and bring life and beauty to it.  Two mightly lamps are built, blessed, and set to the North and South (Illuin and Ormal), spreading light across the land. Then after their labors, they celebrated and rested.  Since no one bothered dealing with Melkor in this time, well, we know where this is going.  While the Valar shaped the world, Melkor was seeding spies among the ranks.  As his stronghold grew i
Post a Comment
Read more

August 11, 2017
The Blind Assassin / Margaret Atwood I really wanted to do some Atwood, and while much of what she writes is regular literary fiction, some of it does fit within SF/F, or general Speculative Fiction.  I made a deliberate choice not to do The Handmaid's Tale (instead choosing The Core of the Sun ), and I didn't really feel like re-reading Oryx and Crake , or using the second book in the series as a book club pick.  So, I stumbled across The Blind Assassin which teased of a historical fiction with a science fiction story intertwined.  So there we go, a June read. Yeah, I'm writing the review in August.  It took me a bit to get through this one. I've come to discover that with most of Atwood's novels the first half tends to slog for me, then somewhere around halfway through they pick up and suddenly become significantly more interesting.  That definitely proved true here, at least for my experience.  The "science fiction story" was less than I was h
Post a Comment
Read more

August 04, 2017
In which the Elves (Eldar) tell us about the Valar and Maiar. Remember last week when I paraphrased a Bible verse?  Well, we get some Book of Genesis here. In the beginning... Iluvatar created the Ainur, who made his Music and set forth to fulfill the visions of Earth and Iluvatar's beings within.  Which, we've already covered, so let's keep going into the nitty gritty of pantheons and numerology.  Or at least lightly brush up against them. Of the Valar, the "angels" and the Ainur on Earth we go from less exciting "beings without sex but their own gender determination" to two nicely matched sets of seven Lords and seven Queens (plus Melkor of whom they don't like to speak).  The Ainur are often viewed as gods, and are at the very least, the intermediaries that are most likely to have any impact on one's life.  They preside over different areas of the Earth, in a manner familiar to Greek mythology, including Manwe and Varda residing in hal
Post a Comment
Read more

August Read: A Canticle for Leibowitz

August 02, 2017
Waiting for this one to come in via ILL. I went back and forth on whether or not to include this one.  Some descriptions sound amazing, others I shy away from.  Now that I'm about to dive in and flipping through some more detailed summaries, I'm pretty sure this is a book I need to read, and not just because it's considered a seminal piece of speculative fiction.  My worry now is that it won't live up to my expectations. The book starts out hundreds of years after a nuclear war, the fall out of which was beyond the immediate cost of life, nuclear contamination, and environmental destruction, but extended to a rejection of intellectual growth and invention.  Leibowitz smuggles, archives, and protects what he can, and the basis of his work later becomes a monastic order, and even further in the future we see it in the face of another nuclear war. This will not be a light happy read.  That's OK, I deliberately chose light fare for July, and there's a value to
Post a Comment
Read more
More posts