Showing posts from April, 2018
Show all

Silmarillion Blues : Of the Rings of Power and the Third Age 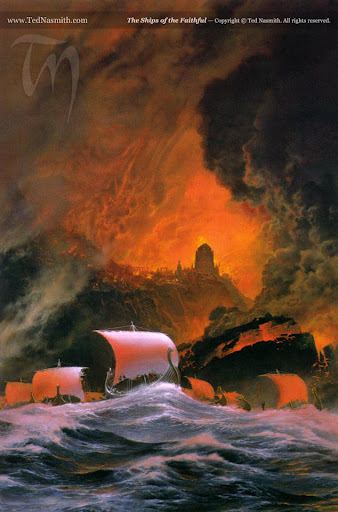 For a lot of us, this final chapter is what we started this journey for.  This is the final pieces in the set up for the story of the One Ring that leads us to The Hobbit and The Lord of the Rings . Sauron, long sided with Morgoth, claims to repent of his deeds under Morgoth, but not his pride.  So when summoned to Valar for a sentence he departs to hide within Middle-earth and fall back into his old ways.  Meanwhile, life goes on in Middle Earth.  Cultures rise, cities succeed and fail.  Men multiply and "most of them turn to evil."  Middle Earth seems forgotten by the Valar, at least to Sauron, so he moves forward with his plans and manipulations. With his One Ring he perceives all things done by the lesser rings, but the Elves were aware of his use of the Ring and so removed theirs and hid them away, refusing to hand them over when he demanded them.  Thes were imbued with the power to ward of the toll of time, and were forged by Celebrimbor, untouched by Sauron even t
Post a Comment
Read more
More posts