Showing posts from December, 2016
Show all

December 31, 2016
The Emperor's Soul  / Brandon Sanderson The Emperor's Soul  is a novella about a thief and a Forger, her last operation betrayed, now awaiting execution for her crimes.  Then instead she is offered the challenge of a lifetime, re-Forge the Emperor's soul, re-imbuing cognizant life into the damaged vessel of the Emperor's body.  A challenge beyond most Masters, even with the proper time and equipment, Shai must complete her project in an impossible amount of time and figure out how to escape before her use to those otherwise in power comes to an end. I went into reading this with no knowledge or familiarity with Sanderson's Elantris .  I obtained a copy several years ago through an ebook bundle (either via Humble Bundle or StoryBundle ), but never got around to reading it.  I was finally prompted to read it when a friend recommended it as a book club pick, so I slotted it in as a short end of year read.  I'm going to assume that were I familiar with the large
Post a Comment
Read more

The arrival of the Rohirrim does change the tide of battle, but in more ways then simply changing the numbers the army besieging Gondor faces.  Things get a little metaphysical here.  "The darkness was breaking too soon, before the date that his Master had set for it."  Read that again, think about what it might imply that the darkness was breaking "too soon" before the planned date. Villains don't necessarily think of themselves as evil or opposing good.  Opposing the status quo or the reigning power, yes , but that doesn't mean they're trying to make the world a worse place.  Sauron is the Opposition, but much of what fostered this rebellion was resentment and frustration.  The orcs themselves were born out of an attempt to re-create the elves.  Some of the armies flocking to Sauron's banner are doing so out of feelings of alienation and isolation. For all that this chapter is prose, it reads like a battle lay as Theoden leads his Rohirrim i
Post a Comment
Read more 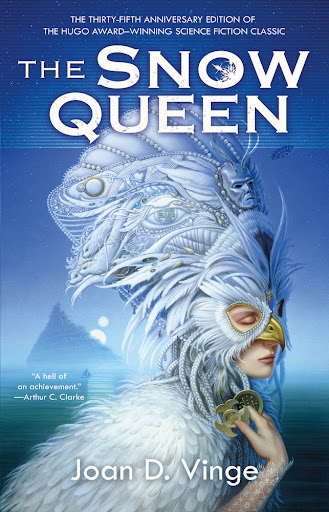 The Snow Queen / Joan D. Vinge The Snow Queen reinvents the well-known fairy tale into a far flung future, combing elements of science fiction and fantasy together into a textured space opera. For nearly 150 years Winter has ruled over the planet of Tiamat, a world in a solar system with two suns which revolve around a black hole.  During Winter the planet is accessible to interstellar travel via a black hole gate, but during Summer the system's orbit isolates Tiamat from other planets and the Hegemony that rules them.  As the last years of Winter wane, the Winter Queen sets plans in motions to retain the throne and power through the transition, even at the expense of genocide. I discovered The Snow Queen through Women in Science Fiction , with Vinge as one of the many incredible female SF authors who's been unfortunately forgotten.  It's a 1981 Hugo Winner with a whole lot going on in it.  I put in as the November Virtual Speculation pick based on that stumbled u
Post a Comment
Read more

Coming up for the new year: Romance Bingo

Not sure how many of these I will hit since it's genre rooted, but I do read a fair amount of romance (or close enough to romance) mixed into my regular reading.  Also, Jan is my month off from Virtual Speculation .  Romance Bingo 2017 is run by  Obsidian Blue and Moonlight Murder over on Booklikes. Regardless of how much I complete, I'm loving the categories. Now to decide if I should hold off on a few books for 10 days!
Post a Comment
Read more

The Wicked + The Divine Vol. 4: Rising Action /  Kieron Gillen, Matthew Wilson, Jamie McKelvie When I reviewed the Book One hardcover edition (volumes 1-3) I commented that "After the Persephone incident I'm not sure where the story will go, who the story will gravitate around the most.  And there is so much more to tell in this story." Well... let's just say there was more than shown in the aforementioned "Persephone incident." Everything has gone to chaos. Laura, or at least Persephone, is still alive. Baphomet is being framed for a rash of highly visible death and destruction among civillians and dieties, and Anenke is playing her own game, steering events to a specific fate while feeding her own version of events to those under her influence. I previously said of the series that: The Wicked + The Divine is a vibrant and engaging rock and roll journey through dreams, aspirations, lust, murder, and celebrity. Whether you believe they a
Post a Comment
Read more

December 18, 2016
A short post for a short chapter. Prolonged rides into battle are no fun, and for Merry it is perhaps harder than for most.  Those that know who he is know of his affiliation with the King, which sets him apart.  Those that don't are likely to overlook him if they notice him at best, and his best-friend is besieged in a city.  To some extent the Wild Men remind me of the elves.  The have not the imbued light that burns away the dark, nor the long lives, but they share a desire to exist in the woods separate from the wider world of men.  They give aid, but almost reluctantly, even though the outcome of this war could mean their end. While riding an entire army to another country takes time, this chapter is particularly short, and is basically non-existent in the film.  Chapter 5 takes us to the point where Chapter 4 ended, with the Rohirrim coming to the aid of Gondor, bringing two of the split story arcs generally back together.  Jackson goes largely counter to Tolkien'
Post a Comment
Read more 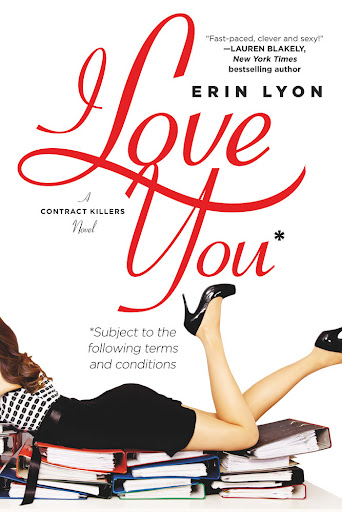 I Love You Subject to the Following Terms and Conditions (Contract Killers #1) / Erin Lyon In a world where marriage doesn’t exist—only seven-year contracts—you don’t marry, you sign. You don’t divorce, you breach. And sometimes, you just expire. Kate is struggling to find her footing. She gave up a career she hated to pursue the law, and now she’s buried in debt and unemployed. At least she’s signed to an amazing guy—hot, sweet, and committed.   Enter the contract killer, the man who pursues only signed women. No commitment, no hassle, all the fun. But Kate has enough fun on her plate… until her partner doesn’t re-up their contract.   After an epic but well-deserved meltdown, Kate gets practical. She accepts a job with her uncle’s law firm, practicing signing law—the one type of law she swore she’d never do. And the contract killer? Now that Kate is single, she’s no longer his type, but he still wants to be friends. Yeah, that’ll work. Kate may be heartbroken, but she’s not im
Post a Comment
Read more 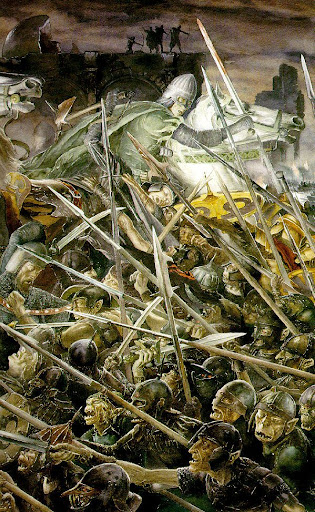 What the last chapter foreshadowed, this chapter brings to the door.  Literally in one case. With the movies in mind, it's easy to forget earlier observations that Merry and Pippin are actually quite observant of the world around them.  Not that I don't love Dominick and Billy in those roles, but they are shown on screen as more immature characters that grow into adults as the story goes.  The growth happens here in the book too... but they start as inquisitive and relatively world-aware (for hobbits) and grow into something else.  For all that he is new to the environment, Pippin's intuitive reading and awareness of the situation is incredibly well tuned. This also makes one of the few times we see Gandalf overtly use magic.  Very little of the magic we see in Middle Earth is overt, rather it tends to be an aspect of innate or imbued nature.  The elves by and large are not 'magical' but rather in Middle Earth creatures of Good and Light bear that as a force i
Post a Comment
Read more "Now all roads were running together to the East to met the coming of war and the onset of the Shadow." I don't know about you, but for some reason that opening sentence hits me as incredibly strong.  This is what everything before now has come to.  To me this chapter is about the scale of war, the mass of lives it touches, the gestalt it takes to confront it, and the loneliness of facing it.  We're not even at battle and the scale is overwhelming. Theoden tells Merry that no matter now stout his heart, there is not a place for him to ride into battle with the Rohirrim.  But I think Tolkien also throughout this book means to say that battle is no place for anyone.  It is something that must be met, but is not an occasion for joy or celebration but of duty and protection. In the film this chapter is mixed in within the previous chapter almost as a footnote, the muster ongoing when Elrond shows up to point Aragorn at a different path.  Of course I know the na
Post a Comment
Read more

December 08, 2016
I went into work today to find an email that included the following: I am in the process of planning a Diversity Summit, hopefully for next April. My first undertaking is to put together a task force to help plan the summit. I really enjoyed your presentation at NELA. I was wondering if you would like to be on the task force? When I recovered enough to do more than make incoherent noises, I obviously accepted.  Then I basically spent the day at work trying not to happy cry. I was recently asked how I got into disability representation as a focused area of interest.  The short answer, personal battles with mental health aside, is my mom.  I think I've talked about this a little bit before on my blog.  Honestly, I'll probably talk about this in the future again as well. My mom suffered from bi-lateral neuritis and carpal tunnel in both arms, with a very severe flare up when I was little.  Actual timing is fuzzy due to my very young age, but I can remember a before and
2 comments
Read more
More posts