Showing posts from January, 2018
Show all

January 29, 2018
Wherein Morgoth spreads the misery though puppetry.  Releasing Húrin to the world after years of captivity, he aims to increase strife among Men and Elves.  His reception is varied, with his own people shunning him as in league with Morgoth.  Even the Eagles state that " Húrin Thalion has surrendered to the will of Morgoth."  This reception makes me think of Gandalf speaking of how to treat Gollum, and the importance of mercy.  I wonder how this story would have changed if people had shown him kindness and acceptance, while acknowledging that Morgoth had his plans for Húrin still.  But again, that is often the beauty of the "curses" Tolkien lays against his characters, their fated doom often not of divine or infernal end, but the result of deliberate action and self-fulfilling prophesy. We some of what could have been, when Melian speaks kindness in face of his twisted perceptions and grief, but it leaves Húrin bereft of purpose and so he passes away.  It also hap
Post a Comment
Read more

January 24, 2018
So in a few weeks I'm presenting a webinar for the Massachusetts Library System! Disability on the Shelf – Looking for Representation in Library Collections When asked, we all can think of a book, movie, or TV show that features a disabled character, but we don’t often think about the representation itself. With diversity and representation increasingly a part of our Collection Development practices, it is important we don’t continue to overlook this aspect. In this webinar, we invite participants to learn about disability, to gain an awareness of representation, and learn vocabulary and resources to evaluate materials. Learning Outcomes: Introduction to disability as a facet of diversity representation Concepts of disability Awareness of tropes, stereotypes, and representation in popular media Vocabulary to discuss and evaluate materials Resources Interested?  Sign up here: http://calendar.masslibsystem.org/event/3893912
Post a Comment
Read more

January 23, 2018
We / Yevgeny Zamyatin Several things drew me to We .  Comparison to 1984 is unavoidable, yet it predates it by several decades. A science fiction dystopia written in 1921 Russia that is still being read and discussed today seems like the type of foundation literature I should be familiar with. The book is definitely an interesting read, pulling on themes we expect to see in any modern literary dystopia with investigation and discussion of what it means to be an individual.  It is also difficult to read, a short novel that makes use of uncomfortable descriptions and has passages that are undeniably racist.  What remains is to untangle what is relic of the environment in which the book was written, what is an aspect of the horror of the setting, and what is true bias of the author.  Philosophically interesting, but for me the discomfort rides heavy even if took minimal space in the text. Discussion Fodder: What aspects of this book are due to its dystopia setting, and what aspe
Post a Comment
Read more

January 23, 2018
So begins another year and another set of books to read, hopefully you'll join me.  The selections this time around include three long-overdue rereads, one a sequel to a book I picked my first year, and eight books that have popped up and looked particularly worth reading.  There were actually a good half-dozen more titles at various points I had meant to jot down for this list... and apparently never did so.  Hopefully they'll come across my desk again some time soon.  Otherwise, we'll see how this goes!  I only vaguely know what to expect for most of these. February: Chill  / Elizabeth Bear March: A Wrinkle in Time / Madeleine L'Engle April: The Sheep Look Up / John Brunner May: Islands in the Net / Bruce Sterling June: The Shore of Women / Pamela Sargent July: The Forever War /Joe Haldeman August:  The very best of Kate Elliott / Kate Elliott September: Infomocracy / Malka Older October: Lovecraft Country  / Mike Ruff November: Autonomous / Annalee Ne
Post a Comment
Read more 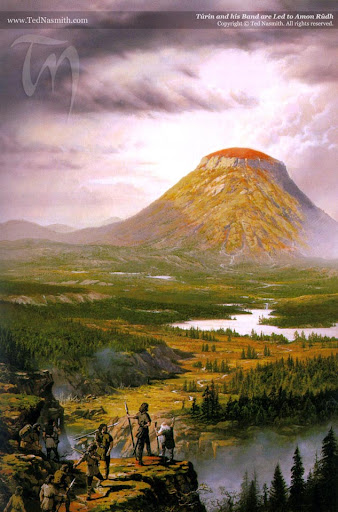 As previously related, Húrin was captured and his family cursed.  Now we get to read about it "in brief."  It's worth mentioning that The Children of Húrin exists as its own novel. As it stands, this is a story of mistakes, pride, and overall bad decisions.  Maybe at some point folks will start learning to listen to Maia.  I'm considering just calling Melian "Cassandra" from now on. Túrin was sent into Thingol's fosterage, where he does well until news of his mother and sister stopped, and he went searching.  On his return he was worn, unkempt, and probably not in the best head space... and a councelor decided to be petty and a few clashes ended with Saeros falling into a chasm and Túrin deciding he was an outlaw rather than risk judgement and imprisonment.  He goes a little edgelord there, becoming the captain of outlaws and naming himself Neithan, or "the Wronged."  Seriously, dude?  Then when Thingol sends someone out to make sure Túri
Post a Comment
Read more

So much for taking it easy

January 17, 2018
A few months ago, I mused that I had a lot going on .  Truth be told... I did.  Maybe that led indirectly to the misjudgements of time and work load that led to where I am now.  Whoops. Gaming-wise things have quieted down... with some regular contributions to the monthly Sabbat game I help run, and apparently writing Regional Plot when I get horrible ideas for our monthly Space game (that I do not help run).  I am attached to a few large projects, but they're on the back burner until things kick off in a bit.  Thankfully.  Panic for all of that is due to start this summer most likely. Professionally things are quite interesting.  I'm in the middle of trying to write (and appropriately beat into shape) an essay for a professional publication on immersive play in libraries.  I was hoping to have it already done but things keep being busier than expected.  On top of that next month I'm giving a webinar on disability representation in libraries.  This shouldn't be a b
Post a Comment
Read more 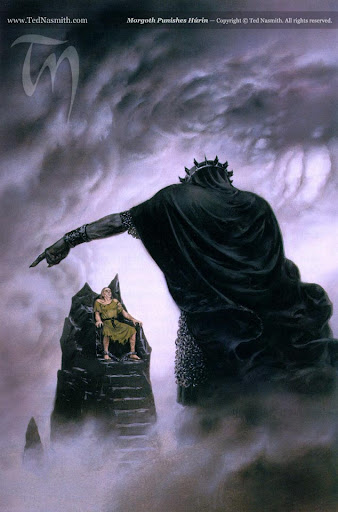 We start out with Beren and Lúthien in their (literal) new life together, visiting their family and then leaving to live their own life (and reproduce) "until all tidings of them ceased." And then we go on to a different story.    Maedros takes heart from the deeds of Beren and Lúthien in their blows to Morgoth and tries to unite the different Eldar peoples to stand against him.  Sadly, sons of the father and all that, this is less effective than it could be, though they make a showing.  Also, I think we can all agree showing up and making ultimatums rarely goes well, so haughtily demanding that Thingol hand over the Silmaril or become their enemy. What follows is a hot mess. Morgoth has his plans, the Elves do their best to out-think and overpower them.  Unexpected aid shows up, but the forces are also drawn in when they should stay back.  The Elves might have had a chance but for betrayal by allies.  The Dwarves stood against dragon fire and foe, but Balrogs struck do
Post a Comment
Read more
More posts