[Blog Tour] An Import of Intrigue 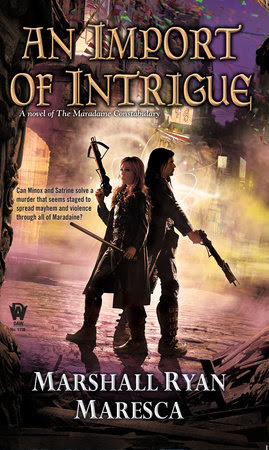 Like A Murder of Mages, An Import of Intrigue jumps right into the action with Inspectors Rainey and Welling.  Actually, the death they start off investigating... and the following debacle with a pit bear are almost tame considering the tempest brewing within the neighborhood of Little East.  A murder of a foreign dignitary with staged clues to point blame at the different (and at times conflicting) Eastern Immigrant cultures.  Pasts, present, and politics all come to a head as tempers spark riots and threaten a citywide war.

A solid sequel, but even with country names An Import of Intrigue still fails to escape the trappings of an almost standard fantasy Sherlockian Europe.  The novel tackles racism and sexism with mixed success.  The women are strong, often complex, and often undervalued.  The cultures read a bit too familiar to stereotypes of our Middle and Far Easts.  The book itself however handles multiple narratives and themes well, all while delivering a action-packed story.

Overall, Maresca has created a richly realized world for both his Maradine and Maradine Constabulary series.


IMACHAN : Culture Report
An Import of Intrigue takes place in a part of the city of Maradaine called "The Little East”, a handful of blocks populated by enclaves of immigrants and foreigners from all over the larger world. Most citizens of Maradaine avoid these enclaves, and their only understanding of other countries and cultures comes from Augustine Montrose’s memoir, My Travels of the World. Here we look at an excerpt from his book, where he talks about one of the cultures encountered in An Import of Intrigue.

Any seasoned traveller knows that Imachan is not a singular nation, but ten distinct and unique countries, united through a shared faith. Strictly speaking, the full name for what we consider Imachan is, “The Grand Confederated Nation of the Faithful to his High Holiness the Cehlat of Imachan”. But this confederacy is incredibly loose, and the borders between the countries involved are definitive and strict.

The Imach faith has noted similarities to our own and the Acserian faith. All three believe in a single God who safeguards the world and the souls of the people on it. All three have a strong usage of a holy text to interpret the will and word of God. All three believe in, and pray to, intercessors to interact with God on our behalf. However, in this last part, we see one of the strongest differences. In both Druth and Acserian faith, those intercessors (the Saints and the Prophets, respectively), are mortal people who have been touched by the divine. In the Imach faith, these intercessors are divine agents themselves, as the Imachs largely believe that mortal man cannot ever be truly worthy of the divine themselves.

That is, at least, my interpretation in reading their holy text, the Bahimahl’Ima - The Books of God’s Word. (In most academic circles here at home, it is called the Imach Codex, but having travelled there and studied the text, I think this is a dismissive and reductive name for it.) I probably ended up spending more time in Imachan than anywhere else in the world, and even then I hardly learned about all of it. I spent very little time in the northern nations like Kutiqar and Amalimach— that whole region is hot, arid and, in my personal opinion, unlivable. But the people there make a home.

But one thing I noticed in all of my journeys through Imachan is the different ways the faith manifests itself in the culture. In Kadabal, the faith is like a drum beat that sets a rhythm for daily life, pervasive and demanding. In Ghalad, it is constant hum, always coloring and informing every other part of life, but never in the forefront.

The place in Imachan that is most known in Druthal, and is the most welcoming to foreigners, is The Mocassa. This city-state metropolis on the mouth of the Imach river is a haven for free-thinkers, artists and scholars of every stripe. Throughout the rest of Imachan, things like music, magic, or open defiance of the faith are at best taboo, and at worst sacrilege punishable by public execution. In The Mocassa, daily life is like a celebration of all things forbidden. It is the only Imach state that is ruled entirely by elected council, and the power of the church and the Cehlat of Imcahan is minimal. It’s a city where on any given day, you might encounter a fellow traveller from anywhere else in the world: Fuergan, Turjin, even Poasian. I could have spent years, even a lifetime, in The Mocassa.

But then I could have never come home to tell you about it.

The neighborhood of the Little East is a collision of cultures, languages, and traditions, hidden away in the city of Maradaine. A set of streets to be avoided or ignored. When a foreign dignitary is murdered, solving the crime falls to the most unpopular inspectors in the Maradaine Constabulary: exposed fraud Satrine Rainey, and Uncircled mage Minox Welling.

With a murder scene deliberately constructed to point blame toward the rival groups resident in this exotic section of Maradaine, Rainey is forced to confront her former life, while Welling’s ignorance of his own power threatens to consume him. And the conflicts erupting in the Little East will spark a citywide war unless the Constabulary solves the case quickly.

Marshall Ryan Maresca grew up in upstate New York and studied film and video production at Penn State.  He now lives Austin with his wife and son.  His work appeared in Norton Anthology of Hint Fiction and Rick Klaw’s anthology Rayguns Over Texas. He also has had several short plays produced and has worked as a stage actor, a theatrical director and an amateur chef. His novels The Thorn of Dentonhill and A Murder of Mages each begin their own fantasy series, both set in the port city of Maradaine. For more information, visit Marshall’s website at www.mrmaresca.com.

Advance Reader Copy courtesy of DAW (Penguin RandomHouse) in exchange for an honest review; changes may exist between galley and the final edition.  Special thanks to Marshall Ryan Maresca for his guest content!
blog tour book release book review