February 25, 2017
This chapter is a lot like wading through depression.  You know you need to keep going, and if you can badger yourself enough, you might just manage to keep going.  Friends may try and help, but it's not something you can necessarily share the burden of.  Food and drink are necessary, and maybe even desired, but joy is rarely derived from it.  Left unsaid is that they can shed gear because they are unlikely to survive long enough to need it again.

And of course, we get Sam's iconic line, "I can't carry it for you, but I can carry you." 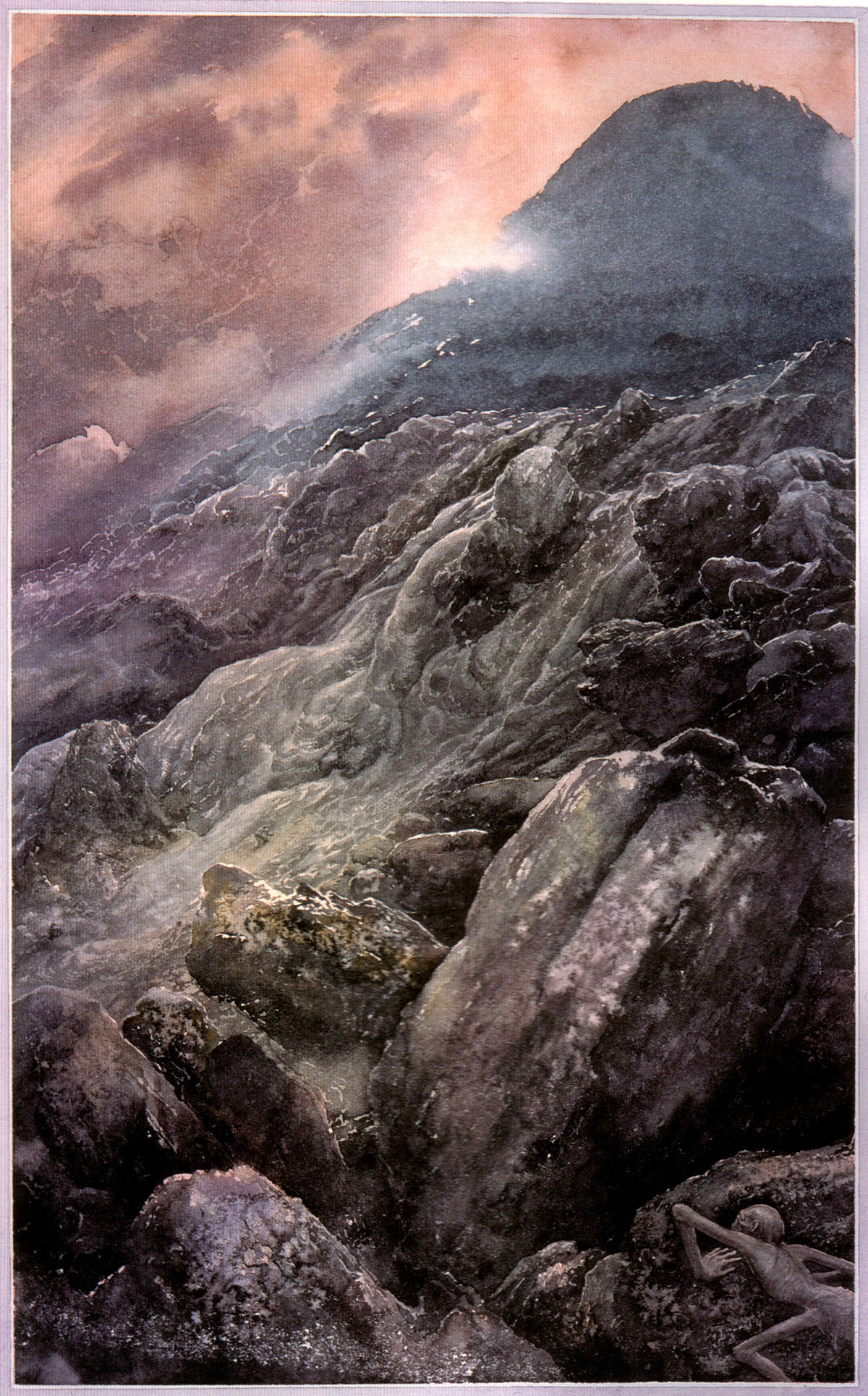 A question I suppose for the hypothetical pondering jumps out at me... I wonder if the similarity between "Gorgoroth" and "Golgotha" is deliberate?

The agency that has offered gentle aid and protection to this quest again extends its hand.  Sauron's eye is held by the conflict at the gates, and both Frodo and Samwise feel the urging that the time to move is now.

In previous readings I seem to have missed some prophetic dialog.  Before Frodo reaches his destination, Gollum makes an attempt for the Ring, and once flung away is told "Begone, and trouble me no more!  If you touch me ever again, you shall be cast yourself into the Fire of Doom."  Then, Gollum himself states that should his precious be destroyed, so to will he.  Both these things come to pass, even if Gollum spoke more from dramatic despair than actual belief or intent.  And of course, Gandalf from the start told us "Even Gollum may have something yet to do."

OK, I have not been kind to Frodo in this reading and discussion, and I both own and stand behind what I've said.  But what I think does set Frodo apart is the nature of himself in connection to the Ring.  The Ring contains much of Sauron's might, yet it is not simply a vessel in itself.  The Ring may shape its bearer, such that even the Lady Galadriel would refuse to claim it.  But I also feel that in many ways Frodo is a vessel in himself.  Pure speculation on my part lends me to think that should anyone else, say Samwise, claim the Ring and its power, Sauron would be angry but less fearful.  After all, the Ring is known to betray its bearer and seeks to return home.  Yet when Frodo claims the Ring, in the heart of Sauron's power, Sauron is afraid.  I think in Frodo the Ring itself found a vessel it could fill, in that claiming the Ring, Frodo allowed it to claim him.  Again, pure speculation on my part.

I'm always left someone surprised and almost confused at how much book is left once the Ring meets its fiery doom, though with half of that content the various appendices, appearances are deceiving.


Looking at the film, Jackson clearly made the battles the action focus of the story progression, but the short bit allocated to this chapter does its job superbly (also, Elijah Wood looks super creepy).  Samwise carries much of the scene, both physically with Frodo and emotionally.  Frodo's parts are a bit flat, but Sam makes you feel it all.
literary analysis Silmarillion Blues