If you've read the main Middle Earth novels, it's hard to remain unaware of Beren and Lúthien.  Their love story is the basis of a cycle we see repeated most notably between Arwen and Aragorn, and a song we hear within The Lord of the Rings.  I'm not going to compare it to Romeo & Juliet, because this isn't a cautionary or satirical play about impulse and naivete that takes place within a single week.  When Tolkien does romance, he goes big.  Realm shaking politics, claims to immortality, and epic trials of valor and devotion.

Our story even starts with the weight of love and grief, as Sauron uses Gorlim's desperate hope that his wife still yet lives to bring about the downfall of Beren's father and his men.  After slaying the orcs that killed Barahir, Beren spends the next few years wandering in solitude and needling Morgoth until a bounty is placed on his head equal to that on Fingon, High King of the Noldor, and orcs flee at rumor of him rather than seek him out for their reward. 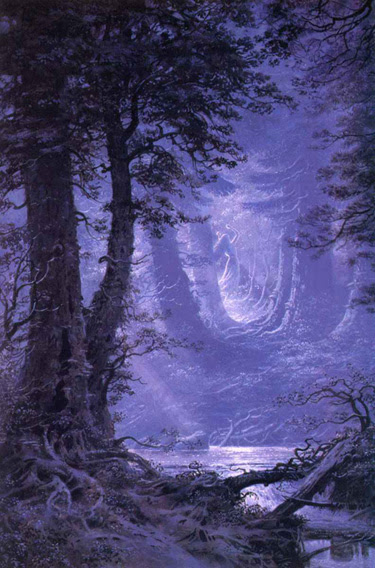 Eventually he makes his way out of Dorthonion and towards the Hidden Kingdom, into the land of Lady Melian and King Thingol, passing through Dungortheb, where Ungoliant's children rule.  On coming into this new land he beholds Lúthien, falling into her thrall. Not knowing her name, he thinks of her as Tinúviel, Nightingale, and continued his wandering hoping to find her once again.  Lúthien, to her doom, falls for Beren on her final sight of him, tying her fate to his mortality.

To make things more complicated, Beren is not the only one to fall in love with Lúthien... and daddy dearest is rather protective.  Possibly a bit racist, but it could just be that he's upset at his daughter becoming mortal.  That Beren has the ring of Felagund, causes some pause, and Melian tells her husband that he shall not slay Beren.

And so, Thingol sets Beren on a task doomed to failure.  Retrieve a Silmaril from Morgoth's crown.  While Thingol would honor his word, by his intent he seals himself within the curse of Mandos.  Betrayal is not a pretty thing, and the Silmarils are cursed with an oath of hatred.  Lúthien knows it.  King Finrod Felagund knows it.  Thingol himself knows it, though perhaps the taint the quest spreads among his kind was far beyond what he ever feared.

Things go poorly, including events we have read about in earlier chapters, and in an odd symmetry.  Beren thrown into a pit by Sauron, and Lúthien trapped into a mighty treehouse by her father.  In an act that would impress the Brothers Grimm, she uses magic to grow her hair out and weaves it into a magic robe and into a robe to climb out of her tower from.  She finds little assistance from the Noldor, with Celegorm and Curufin promising help but instead taking her as token to advance their power, Lúthien saved only by the honor of the hound Huan.  Spoiler, Celegorm and Curufin basically try to ruin everything, and even when this backfires do what they can to make everyone else's life miserable. 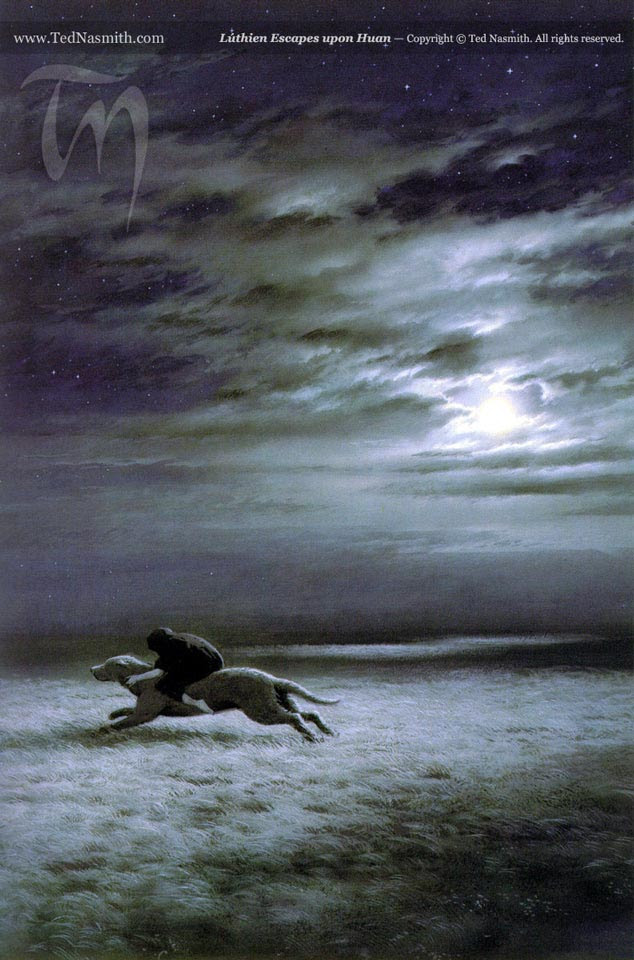 They win free, as we knew they would in the end, through Lúthien's song and wit, and through the sacrifice of others.  My favorite part of this is where Sauron believes that if he takes on the form of a wolf he can fulfill Huan's doom, and is defeated soundly, his spirit sundered from his flesh, leaving Lúthien to claim mastery of his island.  The nice thing is that in addition to freeing Beren, a whole bunch of captives also see the light of day again.  Of course, they then proceed to cause trouble for their lieges for being upstaged by a maiden... but I feel this also establishes a connection or justification to Eowyn's  blow against Sauron in The Return of the King.

But we aren't done yet, Beren still needs to retrieve a Silmaril from Morgoth's crown.  While I get why he didn't cut out all three stones, I'm wondering why he didn't just grab the whole *crown.*  I'm sure there's some reason.  Regardless, Beren doesn't want Lúthien to follow him into Morgoth's shadow, she says "fat chance," and the wolf takes her side.  Good thing too, I doubt he could have succeeded with out her.  Their quest almost fails, when Carcharoth, the might wolf raised by Morgoth bites off Beren's hand while it holds a Silmaril, and the Morgoth's host awakens.  Fortunately, the Eagles came.

Home is not as it once was when they return.  Lúthien thought lost and with it the light she brings and the Doom playing out.  Melian I feel is less than pleased with her husband throughout this.  Of course, Beren has not the Silmaril with him... but it is in his hand.  The Silmaril and his hand are regained, though it costs Beren and Huan their lives.

I had to re-read the ending of this chapter a few times, going "Wait, did he just die? ... and how long after did Lúthien depart this mortal coil?"  Some how up until now I remained unaware that Beren flat out died and due to Mandos' pity and Lúthien's choice they had a second chance at living together.  I mean, they're Elrond's great-grandparents (...and progenitors of Aragorn's line, but at least there's a significant number of generations before Aragorn comes out).  At first read I was left wondering when they had a chance to reproduce, particularly since Tolkien is not really known for explicit sexy times in his writing.  It looks like this chapter was devoted to how the two of them created the romantic story of Middle Earth, and a romance cycle that is destined to repeat itself, rather than the life they actually lived together.
literary analysis Silmarillion Blues