Silmarillion Blues : Of the Rings of Power and the Third Age

April 10, 2018
For a lot of us, this final chapter is what we started this journey for.  This is the final pieces in the set up for the story of the One Ring that leads us to The Hobbit and The Lord of the Rings.

Sauron, long sided with Morgoth, claims to repent of his deeds under Morgoth, but not his pride.  So when summoned to Valar for a sentence he departs to hide within Middle-earth and fall back into his old ways.  Meanwhile, life goes on in Middle Earth.  Cultures rise, cities succeed and fail.  Men multiply and "most of them turn to evil."  Middle Earth seems forgotten by the Valar, at least to Sauron, so he moves forward with his plans and manipulations.

With his One Ring he perceives all things done by the lesser rings, but the Elves were aware of his use of the Ring and so removed theirs and hid them away, refusing to hand them over when he demanded them.  Thes were imbued with the power to ward of the toll of time, and were forged by Celebrimbor, untouched by Sauron even though they were subject to the One. 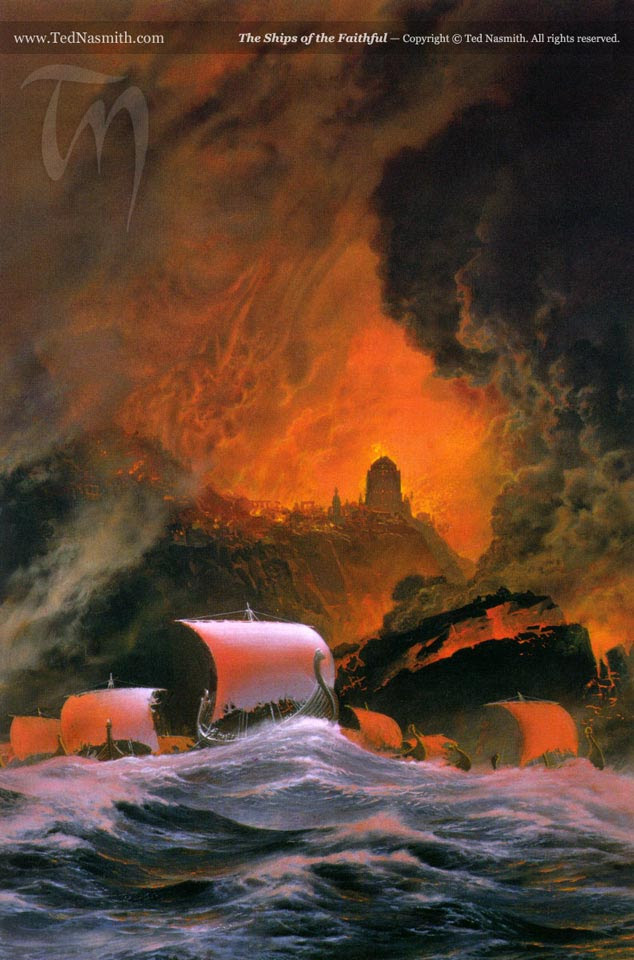 War rages between Sauron and the Elves.  Rivendell was founded by Elrond, a stronghold and refuge, not simply a place of beauty and rest as we tend to think of it.  Of the other rings nine went to Men who fell to his will, becoming the ringwraiths, and seven to the Dwarves who proved more resistant, their rings in the end consumed by dragon-fire or taken back from their hoards by Sauron.  The conflict comes to a halt when reinforced by the Numeroreans, to whom Sauron seeks to gain some advantage by allowing himself to be taken hostage... a gamble that ends in the world breaking and himself falling into the Abyss.

The Numenoreans establish themselves within Arnor and Gondor, but just as they survived, so did Sauron, returning in secret to Mordor.  What goes from here is not a simple battle but a war of attrition, a siege lasting seven years.  And the turning point when Isildur cut the Ring from Sauron's hand, claiming it for his own.

We know how much of this goes.  Isildur betrayed by what he claimed as his family's legacy, and his broken sword left to his sons.  Over time, the strength of Gondor wains and is forgotten by the world at large, remembered by Elrond and few others.  The three rings remain hidden, one in Galadriel's keeping, and one in Elrond's, and one hidden even deeper.

Yet, they know they are on borrowed time.  The fading years before Sauron will come again and the Elves pass into the twilight.  The Greenwood, realm of King Thranduil, falls under a darkness and becomes the Mirkwood.  Meanwhile, the Istari appear, known to us as Wizards, from across the sea, including the two we know as Gandalf and Saruman, named in truth Curunir and Mithrandir.  From there we know the rest of this story, how the Ring was found, and how the Hobbit Frodo took the Ring to Mount Doom where it was cast and unmade.  At last the bear of the third ring was made known, that Mithrandir himself was entrusted the Ring of Fire by Cirdan the shipwright.  And with the waning of the Three, the last of the Noldor take their leave of Middle Earth.

It amuses me on some level that the last nineteen pages give us a summary of the entire Lord of the Rings trilogy and it's most salient background points.  But it makes sense as The Silmarillion isn't a linear historical story of Middle Earth, but a collection of stories covering it's formation and history, overlapping and touching on some of the same time periods again and again.  It's very nuanced in places, while making great leaps at others.  It's a book I struggled with at times, places and names a pronounced weakness on my part.  At the same time, breaking it down week by week with another person helped me (and I hope him as well) draw out more meaning.

We're both in the middle of some life chaos right now, but our plan is to continue at some point in the near future with additional works.  If Troy decides to reread The Lord of the Rings, I will rejoin after that point as we move on to "new" material, otherwise, we'll move forward together sooner.  Thanks for staying along on this journey so far!
literary analysis Silmarillion Blues