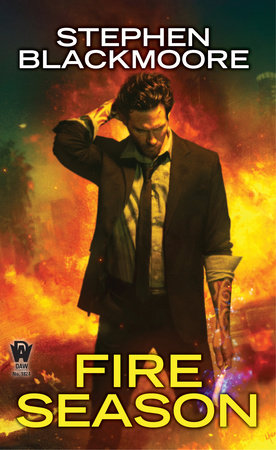 Eric Carter would be a good contemporary to Harry Dresden (The Dresden Files) and James Stark (Sandman Slim).  Or maybe they'd all kill each other in a giant fireball, I'm not really sure... but I am considering to see if there's any fanfiction involving them in combination on AO3 now...

Where the series stands out is the styling of the magic and the mythologies it pulls its inspirations from.  Dresden and Stark for example, are mages or wizards that throw around power, exerting their will and using it to shape forces in the world around them in their series.  Carter, however, is a necromancer... which comes with its own special way of looking at things.  That's especially good because he's got a whole lot coming at him that needs some creative solutions.  Pissing off Quetzalcoatl may have been worth it (and necessary) at the time... but gods tend to hold grudges.

Now his City is burning, and fingers are being pointed at him for the deaths of other mages.  The death count is rising, and maybe, just maybe, he has the pieces and alliances to survive this.  If he can find them in time.  If he's willing to make the right sacrifice.

Advance Reader Copy courtesy of DAW (Penguin RandomHouse) in exchange for an honest review; changes may exist between galley and the final edition.
book review