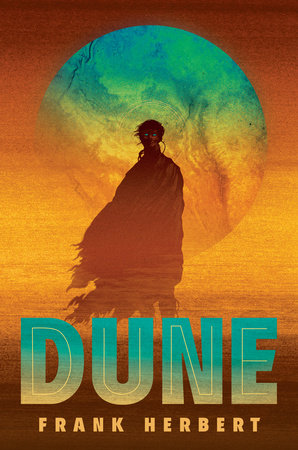 Dune is one of those books I don't know where to start.  There's little about this book that was idle creation, the first novel alone containing deep and deliberate lore, born in part out of the author's own work and study in ecology and environmentalism.  I have not read more than this first book, so I do not know if the story later loses its way, it's depth, or if it loses sight of the consequences of Paul's own actions.  But I am in awe as I periodically learn more and more about the book's genesis, depth, and impact on the genre.

That is not to say the book without flaw, the coding of Baron Harkonnen for example.  More that it's a significant body of work, and that flaws should be part of any higher or academic discussion of the novel.  I say academic b/c I would totally take a literature class that unpackaged Dune.

54 years after it's initial publication, it's not an unknown novel, and most things I could say about it have already been said by more skilled writers than I.

It's the story of a young man named Paul Atreides, born into the ruling class and shoved into the deep end of political games, conquest, and an immeasurably old human breeding project.  It has notes of Laurence of Arabia, deep environmentalist roots, and the sprawling scope of a Space Opera.  It's a novel of Destiny and fanaticism, survival and the dangers of becoming a myth instead of a person.

As for the deluxe edition in my hands.

Damn this thing is gorgeous.  I was showing it off to folks and didn't even realize there was art on the inside of the dust jacket until I took it off to mylar it.  The outside of the book adheres to a saturated gold/orange and teal, the inside is a more subdued palette, but just as rich in color.  It's length is no longer considered so preposterously outsized that only Chilton would touch publishing it, and will be a lovely addition to your bookshelves if you are in need of a new copy.