Sometimes the little things are quite big

August 30, 2013
So back at Book Expo America I met a whole bunch of awesome authors, including Chuck Palahniuk, who I've described as "possibly one of the coolest authors I have ever met" and then completely failed to explain why.

Well, several months later I can finally talk about one of the reasons he is so damn awesome.

My cousin (not actually my cousin, but close enough) Scott is a huge Palahniuk fan.  This man's books triggered reading as a fun activity for him, which alone is enough to make me happy.  What can I say?  I cannot image not enjoying reading.  So when I found out that Palahniuk would be hanging out at the Kobo booth doing an interview via questions submitted on Twitter I had to track him down to say hi.  On hearing that I knew someone whom his books impacted he paused me, dug around in his bag, and gave me a SASE with a greeting card inside.

See, Mr. Palahniuk has this game.  My part in it has finally finished and as it has been written about in published interviews I feel I can talk about it without ruining it (besides, it is not like I have a huge readership).  The game works like this: he runs into someone who knows someone who is a huge fan.  He then hands out one of his SASE envelopes with instructions.  The receiver fills out the greeting card with how the cardholder met Mr. Palahniuk, a little about the friend, and a shipping address.  The friend cannot know about this at all because that would ruin the fun.

I sent the filled out greeting card during June, telling only my cousin that I needed his shipping address for something awesome, and that he'd know it when he saw it.  And then we waited.

I like giving people surprise goodies that I know will mean a lot to them.  I may suck at gift-giving in general, but once in awhile I know I have found the perfect gift.  My fiancee can attest to the fact that if I'm sufficiently excited about gifting something I may just give it early or at a completely random time.  This was totally one of those times where I knew this would get a super excited reaction.  My only regret is that I didn't have it delivered to my house so I could be there when Scott got the package.

Tegan, today a box arrived at my house with a return address for "Palahniuk". Instantly I cut my work shoe laces off, raced down stairs with this box. Using only the energy conjured from the excitement of this package. The contents of this box had blown me away, it had me laugh, cry and laugh some more. I have to say, this is BY FAR FAR FAR the coolest gift I have every received. That is in no way an exaggeration. There is no way I can express how fucking amazing this was of you to do. THANK YOU SO MUCH! I really hope I can repay this to you some how.

I'm for real tho Tegan, do you know what he put in the package??
Signed copy of Snuff, "To Scott, who's hard to offend".
Box of Andes Mints
Box of Cracker Jacks
A ceramic brain bank.
2 CD's of Chuck Palahniuk's Tour Stories Volumes I, II (Only available to people who write to him.)
A box of French Shark Cards. Pokersized playing cards. All are moving motion graphics!
A pack of Cinnamon scented matches.
25g of Extra Pure Soap Fresh Verben
1oz Pink Grapefruit scented Soy Candle
Incense care package (Wood incense holder with cones, sticks and candles)

Not only that, but once I asked Scott's permission to write about him he immediately sent me a whole load of pictures.  The written list of goodies doesn't really show how awesome it is, so instead look at this awesome collection of stuff (the Magic cards I believe are not part of the package, last names and mailing addresses inelegantly removed by me): 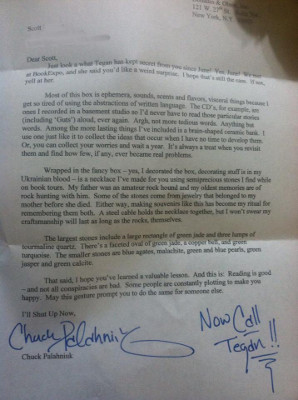 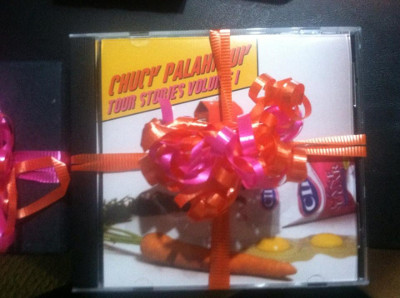 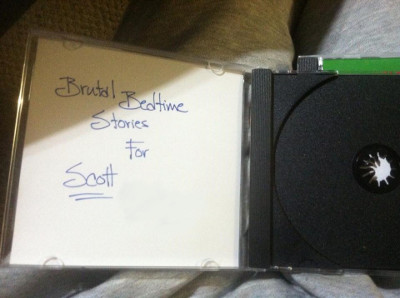 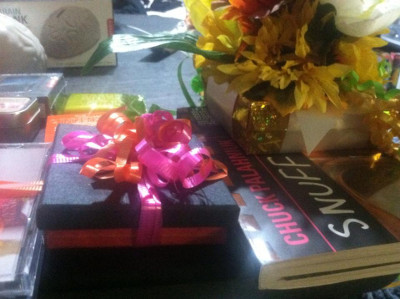 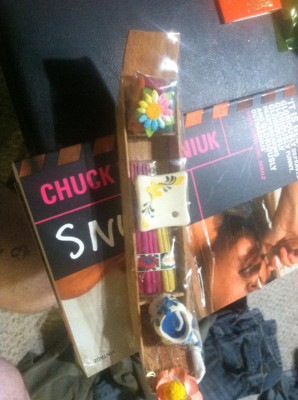 "Last night I opened a package from you. An extremely surreal experience. It first started when I received a photo text message from my step father showing me the return address label of a package that arrived at the house for me. I was at work, cooking at our local Applebee's restaurant. I needed hours really bad to help pay my tuition, but on the inside i was battling my conscious to say, "fuck this Scott, go home and check out your possible Chuck Palahniuk shwag!"
Short story long.. I kicked my grubby kitchen work shoes off, grabbed the package and scissors off the table, flew downstairs to my room skipping every step on the way to plop down onto my favorite chair in the room. Then, carefully and anxiously unveil the mystery of its contents.

Thank you for helping Tegan create a story for me/us to tell that hits all angles of the emotional pie chart." 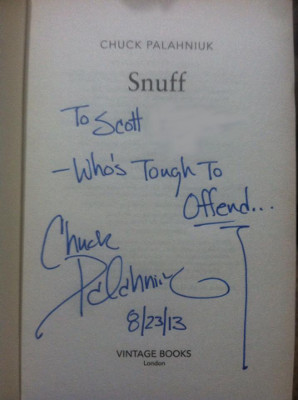 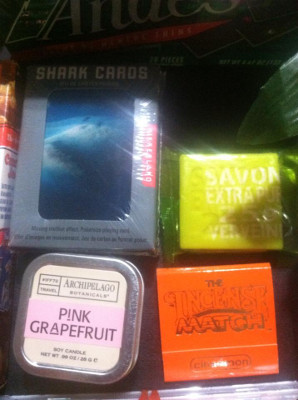 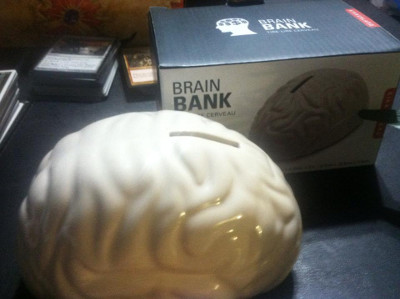 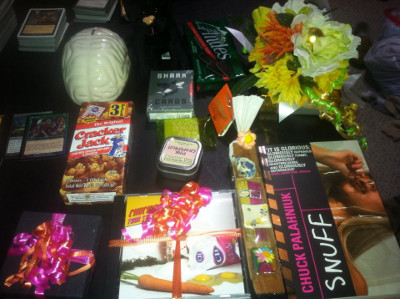 Unfortunately, Mr. Palahniuk is actually somewhat difficult to get in touch with directly as a fan.  His website states explicitly that fan mail will not be forwarded (except during announced windows).  I can understand, he probably would not have time for anything else if it was.  So of being able to contact him directly to let him know how happy his game made someone, I figured sharing how awesome he is, how much things like this mean really matter, was the next best thing.

Right now, as best as I can tell, Scott is engrossed in re-reading Snuff.  After all, this copy came directly from the author.  I completely understand this.  Books can be powerful.  The package showing up and my cousin's excitement totally made my week instantly better than it had been going.  In the large scope of things this one package could be a "little thing" - as Chuck Palahniuk even admits, he has a lot of money, and all I did was mail a greeting card - but that doesn't lessen the importance.
book : book : book