Will the singularity happen?

September 23, 2014
In the Programming for Everyone (Python) class I took over the summer we had a few short written assignments.  I posted my first response during the summer, and then forgot that this post was wallowing as a draft.  Whoops.  I had fun with these open ended questions, and in both cases received good feedback from my classmates who peer-reviewed my submission.


You are now nearly through a first programming class (congratulations). There are many people that feel that at some point in the future, computer intelligence will surpass human intelligence. The word for this moment is called the "singularity". There are endless movies and books about the time where technology will become the master of the human race. What do you think about the singularity? Is it coming soon? What will life be like after the singularity? Will the singularity never happen? Is there a point in time where the impact of technology on our lives will be reduced as shown in alternate future scenarios like "steam punk"? You can pick any position you like but make sure to write in a way to make your point and support your arguments.


I cannot say with a certainty that I believe that a singularity will or will not happen.  In creating artificial intelligence, we are somewhat limited by our own intelligence.  The singularity that seems more plausible to me is when technology and integration moves from the silicone and digital to biology and life.  When the singularity is part of us and the disruptive technology involves the artificial evolution from human into trans- or post-human.

Part of what technology allows is for us to transcend the physical and mental boundaries of our bodies.  While it is not common practice to voluntarily undergo surgery to implant robotics or circuitry, if one looks into the world of assistive technology and innovation one can discover things seeming right out of science fiction.  We are using robotics to give eyesight to the blind, implanting electrodes in the brain of a paralyzed woman allowing her to control a robotic arm with her mind, and more.  In the consumer sector we see things like real-time translations in voice chat, parking assist and collision detection in our vehicles, and Google glass.

As computing devices become quicker, more intuitive in standard interaction, and more portable, we integrate them more and more.  What happens when the bio-mechanical body parts can out perform what we are born with?  What happens if we develop the technology where we can literally save our memories directly to a personal "data cloud"?  How could the ability to turn our bodies into bio-mechanical computers change the bounds of innovation?  Will we be able to learn how to upload consciousness to a digital format, and how will that effect our concepts of life, death, mortality, and even religion?

According to Ramez Naam, author of More than Human : Embracing the Promise of Biological Enhancement, “scientists cannot draw a clear line between healing and enhancing," and raises the question of where the line even is between healing and enhancing.  Should bio-mechanical devices progress to the point where they far surpass nature, I would not be surprised to see people electing for upgrades similar to how today one might visit a doctor for body sculpting plastic surgery.  I feel that the potential singularity that we could face lies in humans becoming something else, where human intelligence becomes intertwined with computer intelligence, rather than the singularity of computer intelligence alone. 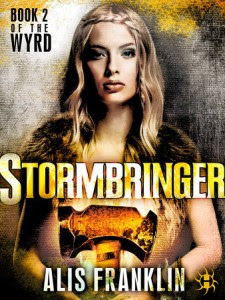 Ragnarok has come and gone, and both the world and the gods are still around.  After the defeat of Baldur, Lain, who is perhaps both Loki and Baldur, must return with Odin's spear to Asgard.  Odin, Thor, and many of the others are dead and gone, the god's children seek to claim the former power of Asgard's glory, Hel was slain in combat and seeks to claim her place among the honored dead, and the Wyrd twists lives, pulling gods and mortals alike.

Sigmund is both a young man, a low-level IT tech, and the avatar of a Norse goddess who was the wife of Loki.  Em and Wayne are the reincarnations of the Valkyries slain in battle.  Still coming to terms with what they are, and what that means, they all must reclaim roles to prevent a second Ragnarok.


Alis Franklin has graciously shared her time with me to answer some questions as part of a TLC Book Tour for her latest novel, Stormbringer.


First off, thank you…
Read more