Silmarillion Blues : Quenta Silmarillion : III. Of the Coming of the Elves and the Captivity of Melkor

August 27, 2017
Wherein the Valar largely avoid doing their job, let things get bad, then scramble to make up for it.

"Through long ages the Valar dwelt in bliss in the light of the Trees beyond the Mountains of Aman, but all Middle-earth lay in a twilight under the stars." 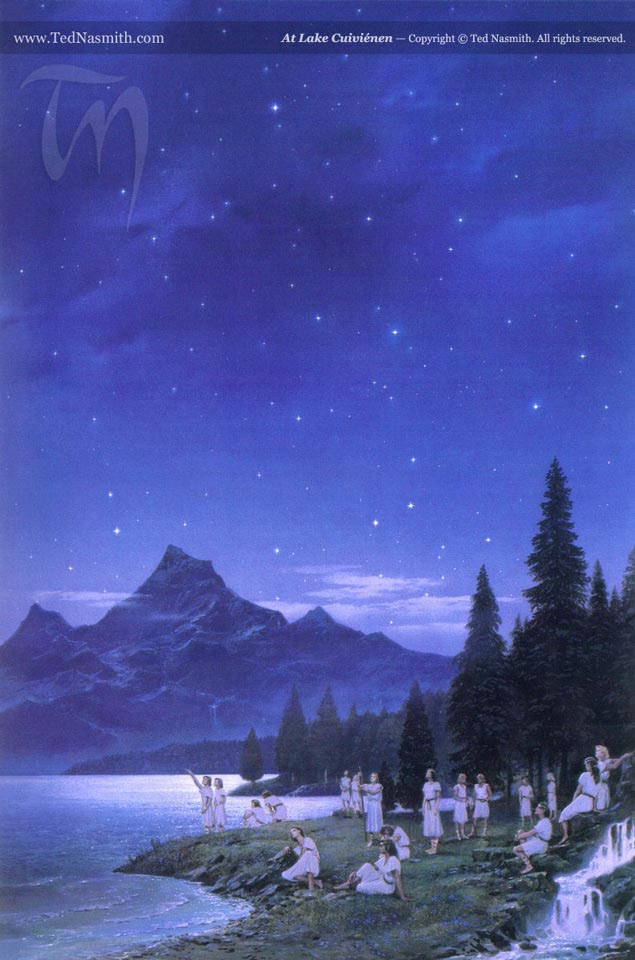 Dwelling in their own private Haven is really not what they were sent to the world to do.  Yavanna moped about, but at least did what she could to protect the life that couldn't grow under the twilight.  Besides that...well, Melkor certainly took advantage of the situation, digging in and fortifying his position.  Most notably we learn about his fortress, Angband, commanded by his lieutenant, Sauron.

Finally the Valar realize maybe they should see about that assignment to prepare the earth for Iluvatar's children?  From this we see the greatest of all works of the Valar since they first came to Arda, that is the making of the new stars.  Not fully bringing light to the world, but bringing some... and this is the only light that the Elves live under when they first come forth.  This profoundly effects their, well religion isn't quite the right word, but perhaps the best way to describe their relationship with the world.  The Elves sing to the constellations, call on the stars and their creator for aid in dark times.

As it so happens, the Valar discover the Elves, the Quendi, in passing chance through Orome hearing their song as he rides through Middle Earth.  Melkor knew of the Quendi first, and had spent shadows and spirits to incite fear and distrust among the Quendi, stealing away those that stray far, so that the Quendi fear that the Hunter had caught them.  See where I start at the beginning with saying the Valar dropped the ball.  But those who had courage and did not flee on first meeting learned that the Hunter was not a thing of darkness.

This all leads to, and is part of, tragedy.  The lesser is that the Quendi are sundered.  Into those who go live with the Valar and see the light of the tree, those who don't, and the order and manner of which they do either.  This doesn't ruin them, but it changes and creates unnecessary divisions that do not benefit the race as a whole.  The greater tragedy is what happens to those whom were lost to the darkness or shadow.  Those were by and large taken into the fortress Utmno, where Melkor twisted and corrupted them, ultimately creating the Orcs.  Melkor cannot create life, but he can remake it.  And so he creates the mortal enemy of the Elves from themselves.

It is the presence of the Quendi themselves that finally stir the Valar to rise up against Melkor, from which he takes insult from, earning the Elves an enduring resentment from him.  The Valar achieved some success, hunting down and binding Melkor, but they failed to fully uncover the depths of his works allowing evil to flourish in hidden caves and his loyal underlings, such as Sauron, to escape.  While Melkor pleads for pardon, none is given, and he is thrown into Mandos "whence none can escape, neither Vala, nor Elf, or mortal Man."

I should probably cut the Valar some slack.  They are new to their jobs.  But at the same time they put off their assignments to create a glorious Haven and revel in it.  They create beautiful and priceless works, that stay locked away from Middle Earth itself.  Only a few of them pay attention to the larger expanse of Arda, and attempt to care for what still lives there.  The Quendi, for whom they were to prepare Arda for, come forth and start their civilization under the shadow of Melkor and are only discovered by the rest of the Valar almost too late.  Were they less fallible, life on Middle Earth would have progressed quite differently.
literary analysis Silmarillion Blues