The focus of the recounting hides Morgoth's motivations and intents, beyond "crush my enemies."  So when the Noldor set a great beacon of their activities by burning the ships at Losgar, plus failed to remain particularly inconspicuous along their journey... the host of Morgoth decides to pay a visit.  Though in exile (voluntary or involuntary) from Valinor, the Norgoth still bear the grace of the light of Aman, and make quick work of the sudden foes.

I'm not quite sure if "Evil indeed were the tidings that came at last to Angband, and Morgoth was dismayed," is really the best way that Tolkien could have worded it.    Something about "evil tidings" to the closest incarnation to evil this world has and all that.  But it gets a point across.  The Noldor, even without fortification or preparation, make for a formidable enemy.  Balrogs, unfortunately make for an even more formidable enemy, striking down the Feanor and the Noldor, and later taking part in the treachery that gains Morgoth Maedhros, one of Feanor's sons, as a prisioner.  Feanor's sons bear him away, where he curses Morgoth's name three times, lays vengeance against Morgoth on his sons, then dies in a fiery blaze of his own wrath. 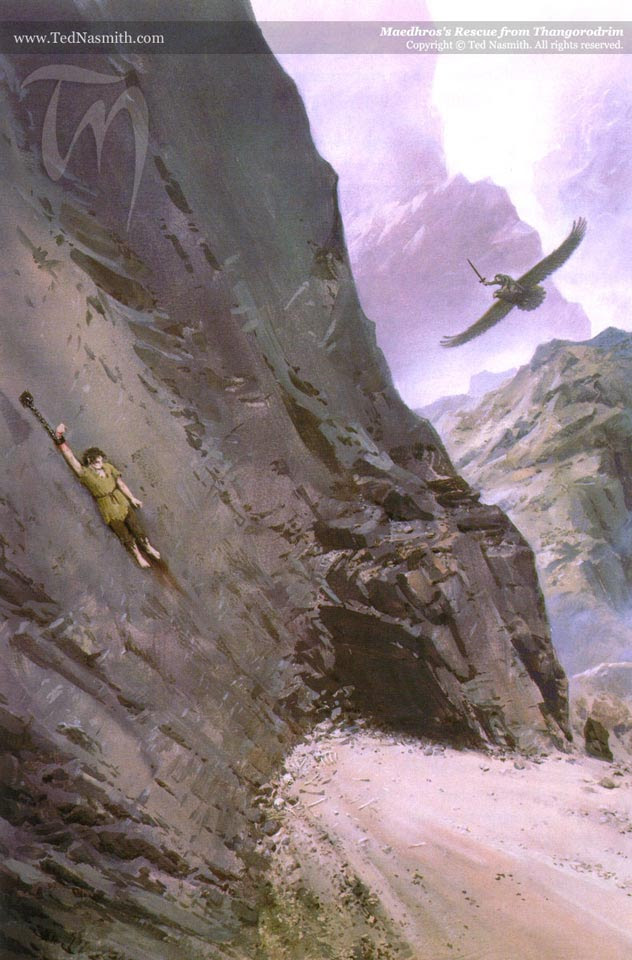 Some of the various sundered Elves are reunited, the Grey-elves, Feanor's followers, and the host of Fingolfin, to mixed results.  Language shifts and experiences cause breaks between them, and the Noldor acted injuriously to Fingolfin's people in the past.  Fingon, Fingolfin's son, both saves the day and proves the value of a good bard.  He takes to the field with harp and voice, and sings not only peace between the hosts but hears Maedhros singing in reply.  With the help of Manwe and the King of Eagles, Fingon frees Maedhros by severing his hand and Maedhros is brought to safety and allowed to heal.

Note for the interested regarding ridiculously large eagles: "Who's outstretched wings spanned thirty fathoms."  A fathom measures about 1.8 meters, or just under 6 feet, so 30 fathoms is about 54 meters, or 177 feet.  I put this here because to me, "fathom" sounds like a huge measurement, and while half a football field is still huge, it is also less unimaginably huge than it sounded when I first read it.

I can't blame King Thingol in his reluctance to welcome in several princes seeking homes and lands of their own, and the dissent between the Noldor at being "granted" territory only supports the wisdom shown.  They show little respect for a King who has held his own, speaking of him disparagingly as a Dark Elf.  There's a bit too much pride and anger among the princes.

In the years of the Immortal, there is a brief interlude of peace and fortification.  During this time Finrod and Galadriel visit with their kin, Thingol.  From this time we see a great things, with Finrod's friendship with the Dwarves and Galadriel meeting Celeborn.  This is more of a laying the groundwork rather than developed into at this point, but should not be passed over.  The interruption of the peace also stands out as we meet our first dragon (or fire-drake), inducing panic and chaos until driven off by Fingon and his archers, and starting the Long Peace.