The really short summary is the daughter of Fingolfin goes on walkabout, gets ensnared in a marriage, has a kid, then goes back home, sacrifices herself to keep her kid alive, and her kid brings glory to the Noldor while slowly becoming consumed with envy and anger.

Aredhel Ar-Feiniel, the White Lady of the Noldor, daughter of Fingolfin, once roamed far and wide in the realm of Valinor.  Now she lives within the bounds of Gondolin, under the rule of her brother Turgon... and after 200 years she's had enough of living in one spot.  When asked for permission to explore again, brother dear wanted her to do so his way.  If you haven't noticed by now, Tolkien rarely writes women who simply concede to what the men around them want.  So Turgon sends his guards to protect her, and she ignores them utterly and does her own damn thing.

Her walkabout brings her up against the Girdle of Melian, where she is barred entry (see last week's entry), so she continues around.  Along the way she loses the guards, and continues on alone until she meets the people of Celegorm who welcome her and invite her to stay on until he returns.  She stays for some time, but too restless to stay and so moves on and ends up in Nan Elmoth.

We've been in this wood before, back when Melian and Thingol met.  However, the days when Melian walked through these woods are long past, and it grew tall and dark, blocking the sun from its floor.  In these woods Eöl, kin of Thingol and known as the Dark Elf, resides since the Girdle of Melian went up.  For all that Eöl resented the the Noldor for the return of Morgoth, the role he plays in this story is more akin to the Noldor than his own branch of Elven kind.  He loves the twilight and shadow, night and the stars.  He, like someone else I could name, created masterworks with metal, devising Galvorn, a black and shining metal "as hard as the steel of the Dwarves, but so malleable that he could make it thin and supple; and yet it remained resistant to all blades and darts." 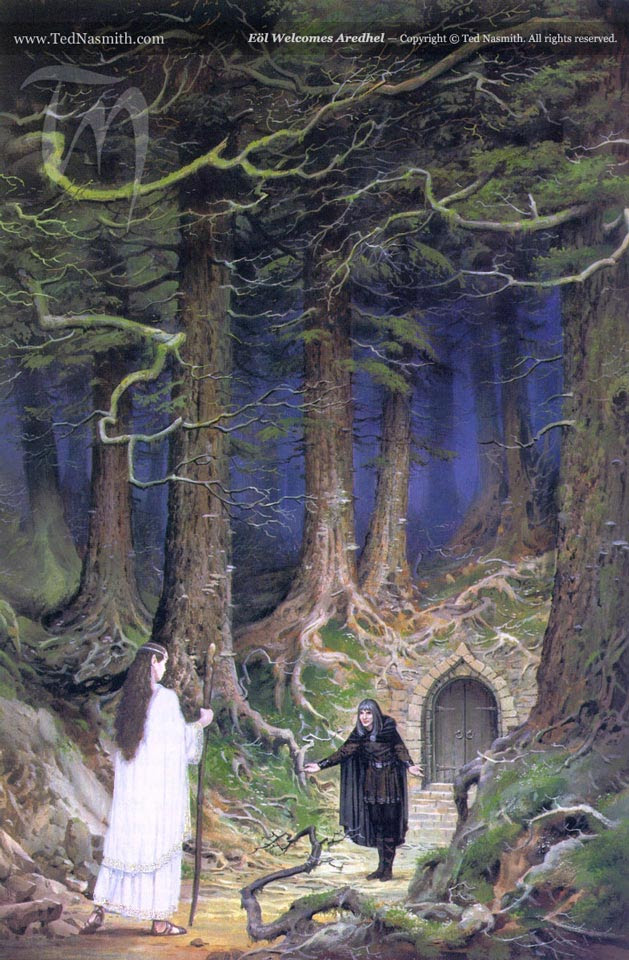 So, Eöl sees Aredhel in the wood and desires her, casting enchantments so that she wanders the woods until she finds him, and he takes her as his wife.  Consent here is a bit dubious, though they live in peace together for some time, and Aredhel shuns the sunlight, wandering far together at night with her husband, or alone, as long as she does not seek out the other Noldor.  In time, she bears a son whom she names Lomion, or "Child of Twilight" in the Noldor tongue, his only name until his father names him Maeglin, "Sharp Glance," at the age of twelve.

I can't imagine Eöl particularly liked hearing anything spoken in the Noldor tongue, and the fact that he names his kid after twelve years makes me really wonder about the father-son relationship for those twelve years.  Even with functional immortality, those first few years of life have to make an impression.

Maeglin spoke little, saw much, and learned all he could.  His mother told him tales of her kin, and in the telling, awoke a desire to see them again.  Maeglin also grew curious about his kin, and he and his father fought, Eöl wanting nothing to do with the "slayers of our kin, the invaders and usurpers of hour homes."  Tolkien doesn't really tend towards milquetoast characters central to the narrative, and if we consider this chapter a narrative in itself... we can make some guesses about how this all ends.  That's right, Eöl goes off, and then Aredhel and Maeglin go off their own way.  When he finds them missing he follows in pursuit, meeting little sympathy from those he encounters and receiving the earnest suggestion that he leave his family alone lest things end poorly for all.

Unfortunately, they were followed too closely and Eöl finds his way in full of wrath.  Turgon greets
Eöl as kin, but insists that the law be followed and Eöl must stay.  This goes over poorly, and Eöl argues vehemently for his son's return.  I'm not sure if this indicates quite how poor their marriage was or that Eöl considers Aredhel her own woman.  When told he must "abide here, or to die here; and so also for your son," Eöl decides that death of his only child is preferable to his son being raised among the Noldor.  Dude, maybe you shouldn't have married into the Noldor then.  Aredhel sacrifices herself, intercepting the javelin thrown at Maeglin, later sickening and dying from poison on its tip.

Maeglin becomes a great boon to the Noldor with his skills at metal craft learned from his father, and proves both deadly and fearless in battle.  Unfortunately he loves his cousin, Idril, who is not only too closely related but cares not for him.  So it is that Maeglin lets envy and jealous wanting corrupt himself, and so brings corruption into the heart of the Noldor... of which I am sure we will hear more of in chapters to come.
literary analysis Silmarillion Blues