Tuor was raised in fosterage among the Grey Elves, until they sought to make their way to the Havens of Sirion, and he was captured by the Easterlings.  There is something of a literary tradition at work here, a Hero captured and enslaved, only to escape before meeting his Fate/Doom.  After three years in thraldom he escaped and proceeded to make life a living hell for the Easterlings, until their king placed a price on his head and Ulmo called on Tuor.  And so Tuor makes his way to Belegaer the Great Sea, where he met Ulmo who bade him to seek out the hidden kingdom of Gondolin, gifting him with a cloak to hide him in shadow from his enemies, and with a message for the Elves of Gondolin. 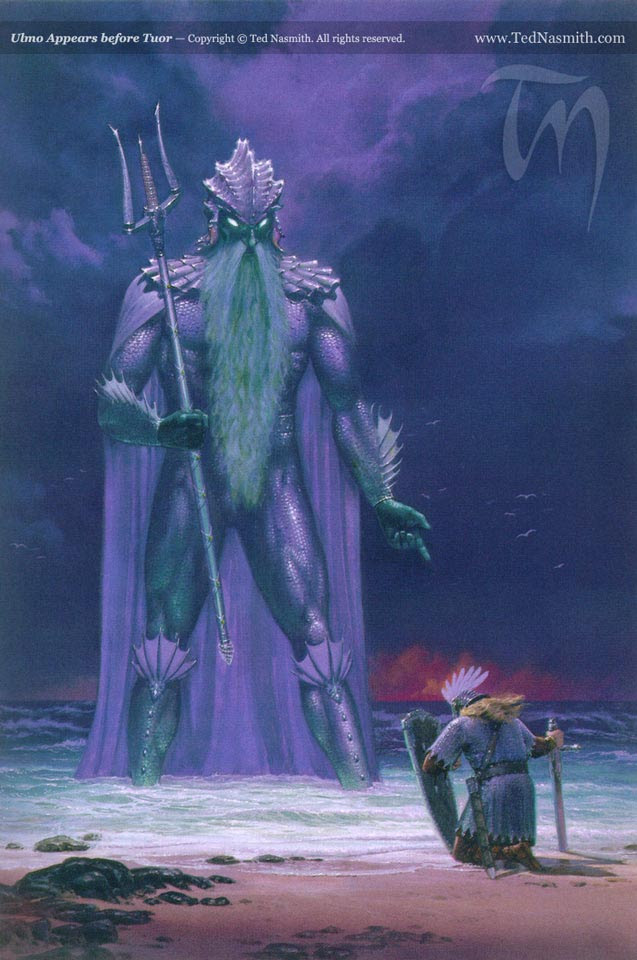 Well, what happens next falls within a bit of a pattern.  Tuor goes forth, and gives Ulmo's message/warning to Turgon, High King of the Noldor, which is summarily ignored.  No one ever listens to the Maia for some reason.  We have some hints of what's to come here as well, if we haven't forgotten about Of Maeglin (and how he has the hots for his cousin Idril...).  Theoden has Wyrmtongue, and Turgon has Maeglin.  Envy and lust for power is an ugly thing.

Paranoia and distrust grows within Turgon, though Tuor gains the standing that he is granted the hand of Idril, Turgon's heir, for all that he is mortal.  Interestingly, Idril does not seem to give up her immortality in this arrangement, and they have a beautiful son.  Gondolin enjoys a time of peace and prosperity, unaware that while Maeglin was secretly off in the world he was taken prisioner and reveals to Morgoth Gondolin's location.  Idril alone has the awareness and foresight to realize that things will not always be well, and prepares a secret way out of the city.  Foresight, healthy paranoia, maybe listening to the words her husband was given by a Maia...

The Fall of Gondolin is not pretty, the city isolated and besiged by Balrogs, Orcs, wolves, and dragons.  Maeglin attempts to take away Idril and her son, but is defeated by Tuor.  The family then leads those that remain of Gondolin away, their efforts ensured by Glorfindel who duels with a Balrog so that his people may escape.  But Morgoth believes his victory complete, while those of Gondolin lived on the shores under Ulmo's protection.

In the end, old age makes its claim on Tuor, and a longing for the Sea.  So he builds a ship and with his wife, sails to the West to unknown end.  However, it is sung that Tuor resides with the Eldar, not to die as mortal men do.
literary analysis Silmarillion Blues