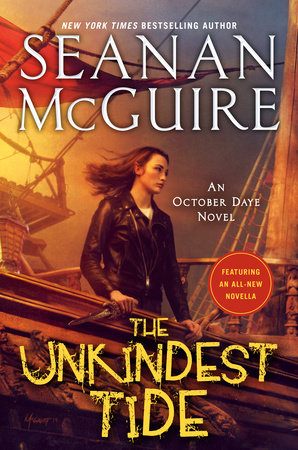 I start this review like I did the last one... Oh, Toby.

We're solidly in what in my head can be classified as "Phase 2" of the series.  I have no clue if this is true, but we're several books past a tipping point as it were, we're seeing debts come due, and Toby is operating solidly in a heavier weight class than before.  Not that it makes the summons she must heed any easier.  It would appear that no good deed goes unpunished, and no one holds a grudge or stirs up trouble quite like the immortal.

The Luidaeg told the Selkies that she was coming to collect on a blood debt long due, told Toby that it would be her skills that would bring it to pass.... and when blood and magic and promises are knotted together, there is no escape.

Once Faire had the Roane, the Luidaeg's children, until mortals were tempted to immortality and killed them for their skins.  The children of those mortals slew their parents and tried to return the skins in an act of self-preservation, and were turned into the first Selkies.  As a Dochas Sidhe, Toby can rework the balance of blood and fae within someone, and the Luidaeg needs her to resurrect the race of her long-lost children.  And Toby owes the sea witch.

Then things get more complicated.

Toby has grown and changed so much over the books, with calluses of a sort growing in response to forced familiarity to unpleasant situations, to loopholes, to the sheer scale of cause and effect.  Other things remain as delicate, as vulnerable as ever.  Family being first and foremost.

What's coming in the future... will change the world these stories take place in, change it in a fundamental way.

I wonder, too, about little hints slipped in about things that are not quite what they seem.  Where that will lead, or if the far fetched idea that's starting to from is even faintly possible.  Will we find out next year in Book 13 (based on the publication trend of the past few years)?  Or will these hints and portents keep building?

I finished this book (and the included novella featuring Raj) within 24hr of it arriving in the mail.  The reduced sleep was worth it.  As for the novella, it reminds us of how much Raj has changed, how much Toby impacts those around her even when she's not present, and gives us a glimpse of where this Prince of Cats is going.

Advance Reader Copy courtesy of Daw (Penguin RandomHouse) in exchange for an honest review; changes may exist between galley and the final edition.
book review