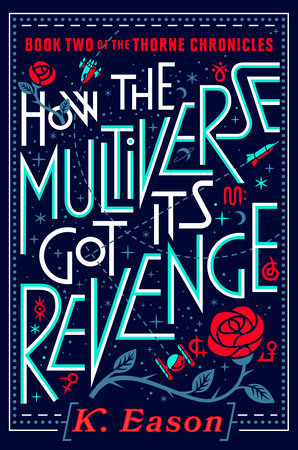 How the Multiverse Got Its Revenge (Thorne Chronicles #2) / K. A. Eason

At the end of book one, Rory renounced her title and position and sought to make a new life for herself defined by her actions rather than that of the family she was born into.  Unfortunately for her, the multiverse had other ideas.
There's something slightly bittersweet about this story, we see growth and development across the supporting cast, and some of that proves painful.  Rory is no longer their princess, and in that absence her companions are growing into their own power and actualization.  Rory still has the fairy gifts, but she still requires tempering instead of falling back on the assumptions of her upbringing.
While still enjoyable, How the Multiverse Got It's Revenge doesn't quite recapture the magic of How Rory Thorne Destroyed the Multiverse.  Still fun and worth a read, just more standard magical space adventure versus the on point "Princess Leia meets The Princess Bride" of book one.
Advance Reader Copy courtesy of DAW in exchange for an honest review; changes may exist between galley and the final edition.
book review