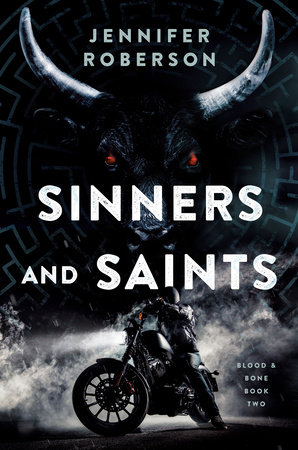 "A biker and a cowboy must fight the coming apocalypse in the second book of the Blood and Bone contemporary western fantasy series.

It’s the End of Days, and Gabe and Remi–an ex-con biker and a Texas cowboy–have been conscripted to join the heavenly host in a battle against Lucifer’s spec ops troops: demons who inhabit characters from fiction, history, myths, legends, and folklore.

But Gabe and Remi, still learning their roles, now must deal with one particular demon wearing the body of an infamous murderer: Jack the Ripper. Young women bearing the names of the murder victims killed during the Ripper’s time are turning up dead, setting Gabe and Remi on a perilous path to save whoever they can, while also battling members of Lucifer’s vanguard bent on killing them.

Sinners and Saints is myth and magic, gods and goddesses, angels and agendas."

Upfront, this sounds like my type of book.  I love me some weird west, some urban fantasy, some tales of myth and magic.  I knew starting at book two would put me at a slight disadvantage, but I've found most genre series one can get away without reading the first book.  Book one establishes and builds the characters and setting, book two gives us enough of a recap to know who and what we're dealing with and generally gets to the meat of things.  Sometimes book two continues the job of book one in establishing the characters.  I'm an opportunistic reader, and if my introduction to a series is the middle, so be it, if I like it I'll go and read the beginning and through the whole thing.  Sinners and Saints lived up to this expectation and made sure the reader was starting with the necessary information.

TL;DR - I didn't start at the beginning of the series, and I don't think it impacted me reading a whole lot.

Reading I struggled with the story in a few places.  It hit a pet peeve early by someone casually saying that Osirus, Hades, and Satan are the same figure... which just makes me put on the breaks and go WAIT A MINUTE NOW.  I'll buy "they have some similar roles and duties," both are involved with the afterlife and the souls of the dead after all.  I also had this really strange struggle regarding Gabe.  For some reason I kept reading Gabe as female, then would be jarred with the text correcting me.  Honestly, the story would be more interesting to me with Gabe as a lesbian biker standing off against the incoming holy war, but it is what it is.

The story does deliver what it promises, and some more.  The ground Remi and Gabe stand on is not as certain as they could wish, and their own roles points of contention among the Host.  Perhaps my favorite parts are those with the ghosts, and you'll have to read to understand that part.

I wouldn't necessarily recommend this to someone specifically for the "Western" attribute.  It has cowboys and the geographic location, but it lacks the connection to the roots of the Western genre or to separate itself otherwise from general Contemporary/Urban Fantasy.  There's no frontier, they are within civilization, and they may be brothers but they are not a band of brothers nor are they ronin standing in the way of injustice.  The Western genre is larger than this, of course, but the fit remains off.

Instead, I would recommend it in line with contemporary fantasy with themes of mythology and angels vs demons.  I would definitely recommend it for fans of Supernatural

Advance Reader Copy courtesy of DAW in exchange for an honest review; changes may exist between galley and the final edition.