Coming out on January 5th, Midnight Taxi Tango!  Get ready by reading the first book in the series, and enter for a chance to win a copy of Half-Resurrection Blues.  Giveaway open through January 5, 2016! 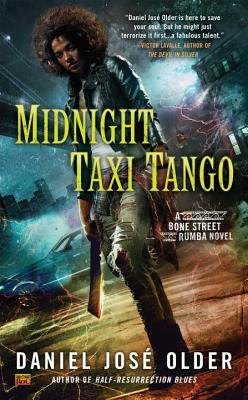 Kia may only be 16, but she's a force of nature and with growing experience to the supernatural thanks to her work at Baba Eddie's botánica and friendship with Carlos.  A series of violent "accidental" deaths in a small region aren't merely coincidence, and events conspire to bring separate players onto the same playing field.  And pieces from Kia's past aren't so gone as she thought they were.


There is so much I loved about this book, and the filthy mouthed librarian that is pulled in just is icing on the cake.

Half-Resurrection Blues really set the stage for Midnight Taxi Tango, introducing us to Carlos' world and the existence between alive and dead.  There are things that go bump in the night, and sometimes it takes a spook to catch one.

The multiple viewpoints threw me off at first, especially as our first introduction to a really fantastic new character is her narration of a scene completely different than anything we've encountered so far.

Carlos is a pretty solid character, but what really makes this book for me is Kia and Reza's voices in the story.  Everyone has a unique voice, bringing different flavors with them.

One thing that really stands out to me as a reader is that white isn't the default race in this novel, and it makes for a markedly different environment than the standard urban fantasy.  The voices are strong, powerful, and, to me as a reader, unique.

Seriously though, I can only hope that there's more of Dr. Tennessee in future novels.  I have a total weakness for bad-ass librarians.