The Hobbit : An Expected Journey - Chapter 17 Thorin... well he's matching a bit of what we've been seeing in the movie.  On revelation about the Arkenstone, Thorin expresses anger, disbelief, and violence.  "Why should I purchase my own?"  The gold has enough hold on Thorin's senses and his pride that Gandalf's reappearance and support of Bilbo's actions and words leads Thorin to believe they are all in a conspiracy against him.

It is probably worth remembering that Thorin has yet to show himself as any sort of strong leader.  He has the birth right, the dreams, the pride, and possibly the charisma, but he has yet to lead on his own.  Our "burglar" has a better concept of what it takes to lead than Thorin, and considerably more charity, sacrificing his entire share of the treasure in order to avert a war that he could simply slip away from.  Gandalf's chastisement of "You are not making a very splendid figure as King Under the Mountain," is perhaps more than a reprimand but meant as a reminder that there is more to ruling than wearing a crown and holding wealth. Had not the dwarven kinfolk come in response to Thorin's call, then maybe Gandalf's words and the dire nature of their situation would have reached Thorin.  But as it is, "So strong was the bewilderment of the treasure upon him, he was pondering whether by the help of Dain he might not recapture the Arkenstone and withhold the share of the reward."

Now men and elves stand between the mountain and Dain's dwarfs, who have provisions for a long siege, and Thorin certainly hasn't provided the promised gold (as if he could on such short notice).  The Elfking clearly wishes to avoid war, but will finish it if he needs to.  Of course, had he wished to completely avoid war then he could have stayed home. 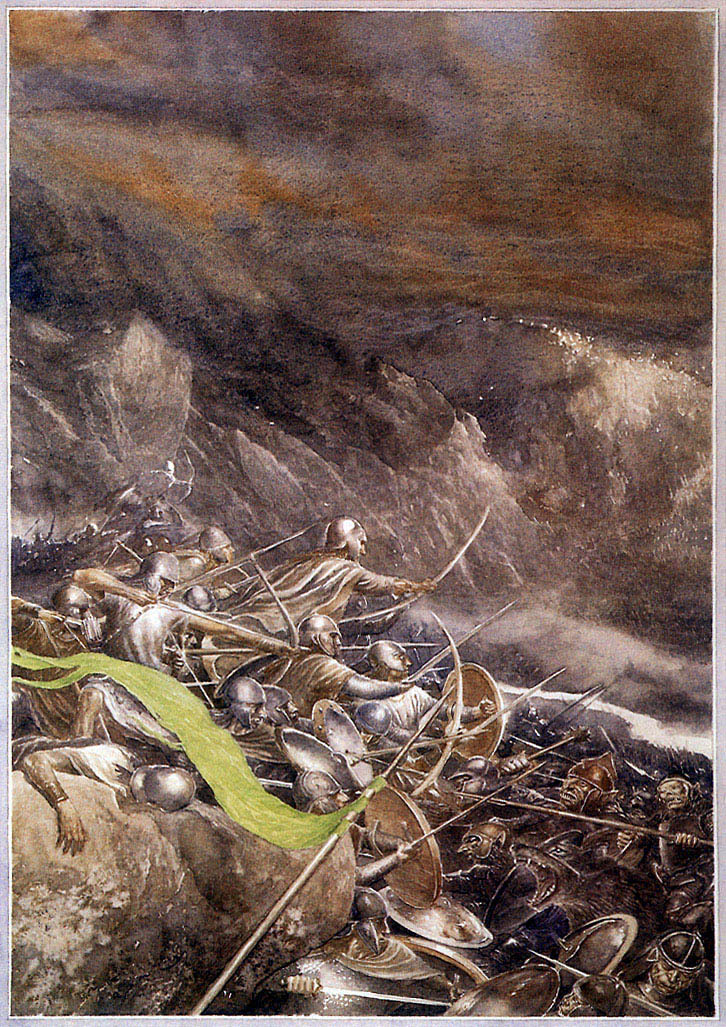 Since the beginning there's been a question of why would Gandalf champion this cause.  I think perhaps this is exactly why.  Smaug was a blight, yes, but a largely lazy and inactive one.  The growing darkness and the spread of orcs and goblins made for a far more pressing threat, as did the further splintering of relations between man, elf, and dwarf.  As functionally immortal, Gandalf has a world view literally beyond our comprehension, though perhaps elves could come close should they care to try.  A life span measured in ages allows for tracking the ebb and flow of events, and this quest for Erebor is something that has far reaching ripples among all the races of Middle Earth.  A battle between representatives of the major factions of Middle Earth could not have been the only outcome of this quest, but from someone with Gandalf's ability to analyze and extrapolate it must have been a clear possibility.  Had the dwarfs journeyed without tangling with the elves and dispatched Smaug on their own, a small triumph would have occurred.  But as their quest touched more and more groups, the interest and response grew, to the point where coming to a pitched battle between the favored races also meant an almost sure incursion by orcs and goblins, and the potential for a much greater strike against the growing darkness.

However, as this battle ramps up we fade to black with Bilbo's unconsciousness shortly after spotting the arriving eagles, leaving next chapter to fill in the gaps.


In the film we've got a really good return to key lines of dialog as they build up to the actual battle.  Obviously not word for word, but we get the lines that really resonate.  We also get lines that were otherwise internalized dialog, such as the dwarven intent to hold out for war on the arrival of Dain.  A big difference is Bilbo actively calling Thorin out on his madness, which for once is perhaps not overstated (here at least).  Thorin's whole "let's move the gold deeper so the enemy cannot get it," goes right back off the deep end, with full on hallucinations.  I think had they wanted to go this deep madness route, it would have worked better if the film had less bloat and less time had been spent on the overwhelming nature of his madness from the start.  Give a better build up to Thorin's full descent into madness, making the self-realization and horror all the greater.

Again, I feel that Gandalf has been relegated from a manipulator of events, a collector of information, and a expert reading man, elf, and dwarf.  Part of that is knowing when to share information and plead, and part of that is knowing when to hold your cards close to the chest.  Gandalf is rarely a confused old man, and most of the time it's because being so suits him exactly.

Oh, Thranduil.  This is where you hit full diva, and I kind of love you for it.  All I can think of as he rides around is "I'm on a moose, bitch."  Ok, it's really some sort of elk, so sue me.  Thranduil has really been distilled into a mirror of Thorin, with much of his compassion and aversion to war shifted to Bard and Gandalf.  We see it last chapter when Gandalf offers Bilbo sanctuary, and we see it in this chapter as the threat of armed conflict arises.  That smirk when Dain calls him out just kills me.

On a side note, while the elven army stands in rank and file they look too mechanical.  I have not spent the time verifying it, but it looks kind of like it's 99% CGI.  If it's all real people (or at least one rank of real people), I admire their stillness and coordination of movement, but it sort of loses me.  Personally, I also disagree that Thraundil would pull the whole "maybe me and my army won't help out with this fight."  He may be a total ponce and hate the dwarfs, but the hatred between elves and orcs goes down to the very roots of their existence.

THE SPICE MUST FLOW!

Er, sorry.  Wrong movie.  But seriously, I'm pretty sure Middle Earth is not Arakis.  Though, if you've got giant stone delving worms, why wouldn't you burrow directly into the mountain?  And I'm not so sure someone proclaiming, "The hordes of hell are upon us!" really fits, as hell is not demonstrably part of Middle Earth, or Middle Earth belief systems.

The battle starts out with some cool promise, especially with the dwarven shield wall, but the line is so quickly demolished.  Overall I'm pretty let down by the sword work and military discipline.  No one can hold a guard or manage to fight in any sort of method besides standing on their own and flailing wildly.  There's a reason there tends to be two forms of pitched battles with melee armies - structured formations or overwhelming flood of maddened berserkers.  The way all of our significant characters fight is going to get a lot of people around them killed (let alone the fact that if I start thinking of your sword-fighting posture as "jazz hands with swords" we've probably got a problem).

Maybe I'm alone in this, but I think it would be amazing to see actual battle-craft being used.

As for the actual joining of Thorin & Co with the battle, twelve dwarfs is not enough to turn the tide of battle, but emotionally it is a huge turning point.  Before now an entire army that came to their aid is fighting while they stay safe behind their walls, separate from the danger that has united the besiegers.  Jackson used this moment well, pulling on emotional bolstering and distinct rallying efforts across the sprawling battle.

I'm calling the review at the point where people run up to the top of the cliff for that whole epic battle of destiny thing.  I wanted to wait until the eagles shows up, but in the interest of being able to keep the story line and the film chronology straight, that will have to wait for when Bilbo learns about everything that happened after he is knocked unconscious in the book.
literary analysis Silmarillion Blues