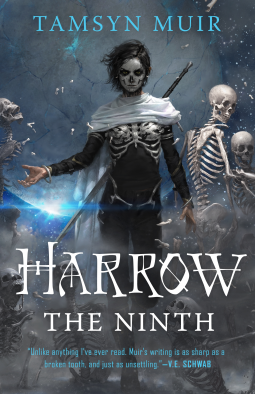 This book.
Where to start?
At the beginning, I suppose.  Or a little bit further than that with Gideon the Ninth.

"In the myriadic year of our Lord -- the ten thousandth year of the King Undying, the kindly Prince of Death! -- Gideon Nav packed her sword, her shoes, and her dirty magazines, and she escaped from the House of the Ninth."

Gideon is sarcastic, irreverent, and stubborn.  She's in your face and demands your attention, tempestuous and bold.  We start with a laugh as we dive into this twisting murder mystery adventure about lesbian necromancers in space.  We end with tears.

The prologue is titled "The Night Before the Emperor's Murder," told from a second person narrator that makes it very clear that something is rotten in the state of Denmark.
Next we get the parados (from Merriam-Webster: "the first choral passage in an ancient Greek drama recited or sung as the chorus enters the orchestra"), titled "Fourteen Months Before the Emperor's Murder," which takes us back to the very start of Gideon... with Ortus Nigenad as Harrow's cavalier.  Gideon's absence is a confusing slap in the face.
The shifting narrative teases with the truth, rewriting the narrative we read in Gideon the Ninth, leaving the reader wondering if we are learning more or encountering a pure fabrication.  Meanwhile Harrow struggles as an incomplete Lyctor, unable to call upon her Cavalier and bearing a sword that reviles her touch.  The Emperor is nothing like she expected, a man undying with the power to resurrect legions, but once just a man who pushed beyond limitations into the impossible and now lives as legend with his origins and those of his Lyctors the subject of myth.
One should never meet their gods face to face.
As we chase the truth and rush towards the Emperor's murder, we are witness to treachery and loyalty formed over eons or binding of soul and flesh, and to acts of necromancy bone magic that if are not perceived as chilling it is only because they are crafted by our heroes not our villains.
Clive Barker, attend.  It's as if Muir went "what if the Cenobytes were our heroes?" and then shed light on the true horror of Harrow's artistry.  For all of Harrow's repeatedly described frailty, this woman is hardcore in a way that unsettles and catches everyone, including the Emperor and his Lyctors, off-guard.
Then when it all comes together in an emotional whirlwind for the reader, pages turning in anticipation and heartstrings singing.
I admit, this is all vague and full of implication, but if you've read Gideon it should come as no surprise that Harrow is to be experienced.
If you wish a simpler review, here is my TL;DR summary:
1. unreliable narrators and hidden secrets
2. a crisis of faith
3. god makes a dad joke
4. in space everyone is queer
(Also, a recipe for soup)
Advance Reader Copy courtesy of Tor in exchange for an honest review; changes may exist between galley and the final edition.
book review