July 31, 2020
Alright ya'll.
Spoilers ahead.
And a bunch of grousing.
If you want my spoiler free and more neutral review, please check out my original review here:
https://libromancersapprentice.blogspot.com/2020/03/book-review-peace-talks.html
Alright... spoilers and complaints below the cover art. 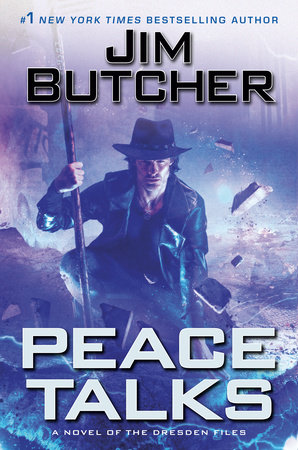 What I can say about Peace Talks is that I did race through it, but I need to mitigate that with the fact that I kept finding my eyes sliding over whole passages without really absorbing any of it.  The writing isn't quite as tight or as connected as his last few novels, with the parts struggling to add up to a whole that led to unintentional skimming.  This was most noticeable in the power fantasy level descriptions of Harry and in a lot of the combat scenes.  By "power fantasy" descriptions I mean the fact that it's mentioned that he can now bench press a truck, which sure, is super strong, but there's been so many other better "show, don't tell" examples of how much strength he's gained thanks to the Winter Mantle allowing him to ignore discomfort when pushing his body that it was kind of *yawn*.  Combat, of course, is going to be chaotic, but the narrative was far too easy to lose.
The book starts out with a mother of all hooks, and you know what, it's in the first words so if you missed the fact that this is my Spoiler Edition review, here's the shot across the bow warning.  Justine is pregnant, something pretty incredible in itself considering that White Court vampires are barely sterile and the amount of latex required for intimacy between the two of them.  Obviously, accidents happen, but um... how did he not notice that condom break?
Karrin Murphy has so much goddamn heart and is 10 lbs of stubborn in a 1 lb sack, but let's be honest, dealing with Harry means that much stubborn is needed.  Seeing the two of them spend a night in together, as a couple, is sweet and so so overdue.  This series has been hard on Murphy.
I'm also growing increasingly uncomfortable with how much Harry descriptions of Molly center on how hot his best friend's daughter is.  Like, yeah, she's curvy, fit, magical, and has that extra sidhe seasoning, but it's a bit ew to me.  I made a comment about this to my partner and he went "Yeah, it's cause Butcher's a misogynist."  And well, I really had no response to that.  But then I realized Molly is one hell of a representation of the Madonna/Whore Complex all wrapped into one.  She's gorgeous and sexy (with the behinds the scene experience to back that up), but as the Winter Lady is forced into chastity (let's save the discussion about all the options that seem to be ignored in that for another time).  I like Molly, but I'm chafing at her framing.
One of my highlights of the book was getting to (finally) see McCoy unleash, even if it was amid hard to follow combat narratives.  It felt like Harry was experiencing what it's like for non-wizards when they watch him unleash.  As a side note, the Hounds of Tindalos are one of my favorite mythos monsters, so I greatly enjoyed their inclusion.
What really, really, stuck in my craw however was how Dresden is again on the suspicious outs with everyone.  Like, didn't we resolve this plot several times already?  Only now, it's with people who it's been repeatedly established are closer to him than anyone else on the White Council.  The animosity of the younger Wardens towards Dresden is jarring and out of place, and it feels like we're back to the first 3 or 4 books when Dresden would face off with Murphy (or the Warden Morgan).  This is to say nothing between what's going on between McCoy and Dresden.  I guess it's too much to ask anyone to actually communicate instead of actively self-sabotaging.  Admittedly, this goes for McCoy as well as Dresden, but at this point in the series hiding Thomas' identity from their grandfather is just a plot point to cause trouble.  The TL;DR is the whole source of internal/in-group strife seems both largely fabricated for convenience and reused from the beginning of the series, ignoring 15 books worth of growth, and I find it both irritating and boring.
Oh, also Harry's apparently the chosen one, I mean a Starborn.  I'm going to hold off discussion of that until I can do a Spoiler Edition of Battleground (expect a regular review of Battleground within the next week, but I'm way happier with Battleground than Peace Talks, even if I'm very upset about a specific thing).
Swinging back to the plus sides, yay for more Valkyries and I find the idea of Mab owing Lara Wraith favors utterly fascinating.  That's a story I'd love to read.
I gave the book a 3 out of 5.  The book had a LOT to live up to, and I'm trying to keep that in mind in my evaluation.  I'm sure many folks will love it.  I remain uncertain of how I feel about the genre shift from dark urban fantasy that was largely tied to a real world timeline to where this book takes it.  I'm going to have to see where it goes.
book review