Like any month, I wanted the April display to be fun.  Then a few months ago I found Encyclopedia Paranoiaca : the indispensable guide to everyone and everything you should be afraid or worried about / Henry Beard and Christopher Cerf.  That pretty much sold me for a display concept.  Only one problem, there's only so many silly yet serious dangers of the world books out there.  So I went a bit broader, and have started generally describing the display as "crazy books."  The label is applied differently across the various titles, and I've included books on conspiracy theories, secret societies, superstitions, oddities, and books generally on how humans are speeding towards their own species demise. 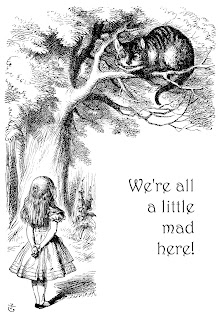 I did actively avoid books focusing on bigfoot/aliens/ghosts/etc beyond the obvious inclusion of a book on Area 51.  Those have a place in an October display some point down the line.

One advantage I have noticed about such a small display is that it becomes immediately obvious (to me at least) when someone takes a book.  About half of my original title seed list was checked out when I set up the display.  Titles on display keep going out as well.
I keep having to find more titles for this display!  Which is proving to be an interesting (and entertaining) challenge.  I started out with a short list of titles, over half of the titles on the list above are add-ons.  By the end of the month I will likely get even more creative in my selections.  I'm glad I went with "We're all a little mad here!" as it lets me play fast and loose with the display's scope.

I really wanted to include Stranger than fiction : true stories by Chuck Palahniuk, but our copy is MIA.  However searching for that title led me to another book of non-fiction oddity by Palahniuk, so everything worked out.  John Hodgman's books count as "we're all a little mad here" all on their own, even without delving into their actual content.
book : book : book display library