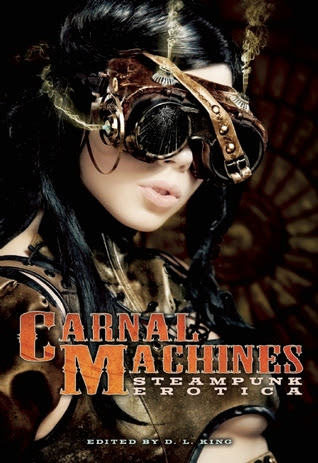 The Victorians wrote some of the best and most enduring erotica. For such a tightly-laced age, people spent a lot of time thinking about things carnal. Jules Verne, Sir Arthur Conan Doyle, Mary Shelley, H.G. Wells, et al enthralled us with their visions of new possibilities. The rich and slightly decadent visuals of the steam age lend themselves perfectly to the new carnality of post-punk era. And, of course, what is repressed will be even more exciting once the corset is unlaced. Steampunk, even without sex, is erotic; with sex, it’s over-the-top hot. A widowed lady engineer invents a small device that can store the energy from sexual frustration and convert it to electricity to help power a home. Teresa Noelle Roberts shows us what it can do, confronted with sexual fulfillment. What volume of steampunk would be complete without a tale of sailing ships and the men who sail them? If your taste runs to sexy pirates in space, Poe Von Page will delight you with the mutinous crew of the Danika Blue and their new captain.

Then there’s the very special room on the top floor in the House of the Sable Locks, a brothel where sexually discriminating men go to have their fantasies fulfilled. Even if a man daren’t put those fantasies into words, Elizabeth Schechter’s "Succubus" will give the madam all the information she needs with which to make her clients happy. There are brothels, flying machines, steam-powered conveyances, manor houses, spiritualist societies. The following stories afford intelligently written, beautifully crafted glimpses into other worlds, where the Carnal Machines won’t fail to seduce you, get you wet or make you hard so, lie back, relax; a happy ending is guaranteed.

A copy of Carnal Machines fell into my possession at BEA last year, but like a good percentage of the books I acquired it got lost in the (huge) pile (of books).  Then I ran into D. L. King at the Steampunk World's Faire and had a fantastic time discussing literature with her and realized that I had one of her projects sitting in a pile of unread books from a year ago (my goal this year is to bring home far fewer titles from BEA).  Since I was taking the train into NYC I figured why not read it on my way to BEA where I can remark on more that I have a copy of this book to D. L. King this time.  If you're raising an eyebrow at me reading erotica on the train, take a good look at romance book covers some time.

Right off the bat I want to state that is is actually Steampunk (might I even call it steamy?) fiction, the authors did not just glue some gears on it and call it steampunk.  Instead we have clever and well written tales of a technology that wasn't.  Not only that but the erotica is both woman positive and sex positive.  Yes, I do hold that some erotica/porn is not sex positive.  These creative stories are enthusiastic and uninhibited as they explore different facets of sexuality.  And they are stories with character development and plot, beyond a framework for fictional fucking (though there is quite a bit of that as well).  Carnal Machines delivers what it promises.