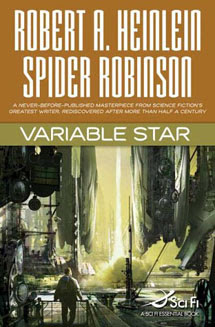 A never-before-published masterpiece from science fiction's greatest writer, rediscovered after more than half a century.


When Joel Johnston first met Jinny Hamilton, it seemed like a dream come true. And when she finally agreed to marry him, he felt like the luckiest man in the universe.
There was just one small problem. He was broke. His only goal in life was to become a composer, and he knew it would take years before he was earning enough to support a family.
But Jinny wasn't willing to wait. And when Joel asked her what they were going to do for money, she gave him a most unexpected answer. She told him that her name wasn't really Jinny Hamilton---it was Jinny Conrad, and she was the granddaughter of Richard Conrad, the wealthiest man in the solar system.

And now that she was sure that Joel loved her for herself, not for her wealth, she revealed her family's plans for him---he would be groomed for a place in the vast Conrad empire and sire a dynasty to carry on the family business.

Most men would have jumped at the opportunity. But Joel Johnston wasn't most men. To Jinny's surprise, and even his own, he turned down her generous offer and then set off on the mother of all benders. And woke up on a colony ship heading out into space, torn between regret over his rash decision and his determination to forget Jinny and make a life for himself among the stars.

He was on his way to succeeding when his plans--and the plans of billions of others--were shattered by a cosmic cataclysm so devastating it would take all of humanity's strength and ingenuity just to survive.

This may set the record for my quickest time reading a Heinlein novel.  I finished reading it at about 2:30AM this morning.  I would say it is safe to say that I enjoyed this novel that seems to float between revered and rejected by the Science Fiction community.

In all honesty, I have trouble considering it really a Heinlein novel, as it was written based on 7 pages of outline, a handful of index cards, and a familiarity with Heinlein's voice and style.  It definitely is Heinlein's story, but ultimately the words belong to Spider Robinson.  Robinson was instructed to "take his outline and write the best damn Spider Robinson novel you're capable of," and he wrote a book that, to me, holds true to the spirit of Heinlein's style.  The characters, relationships, idioms, and troupes largely match what I expect from a Heinlein novel.

However it occurred to me after I finished that perhaps the reason I read it so quickly is that the book lacks the more in-depth commentaries that Heinlein only faintly disguised dialog.  The writing was still in places brilliant, and the details about goats had me laughing, but I have come to expect at least one major treatise on an aspect of society in every Heinlein novel.  This could be on economics, social and/or sexual morays, military service, or other topic.  Even if I find his attempts at feminism oddly self-contradicted (as almost every woman he wrote requires lots of babies to be happy), and am a bit turned off by the occasionally included enthusiastic incest (I don't care if gene selection and tuning would remove any biological downsides, it's still squicky to me), Heinlein was a brilliant man.  The detail in which he thought out the technology he imagined, including ship layouts and engineering principles, is astounding.  He was writing in 1928 about flaws in our economic model that my Economics professors were lecturing on in 2005.

I can understand where devout Heinlein fans are split down the middle on this book.  Robinson has a different sense of humor, a different grasp on technology and mathematics, a different take on society and people.  My personal opinion is that Spider Robinson wrote a fantastic science fiction novel, that exists as a tribute to Heinlein.
book review