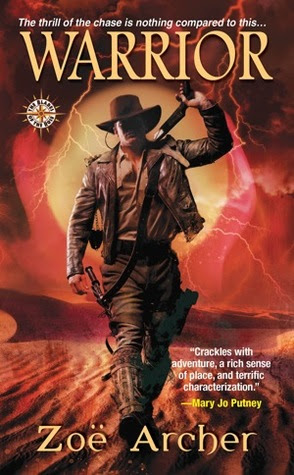 To most people, the realm of magic is the stuff of nursery rhymes and dusty libraries. But for Capt. Gabriel Huntley, it’s become quite real and quite dangerous…

IN HOT PURSUIT…
The vicious attack Capt. Gabriel Huntley witnesses in a dark alley sparks a chain of events that will take him to the ends of the Earth and beyond—where what is real and what is imagined become terribly confused. And frankly, Huntley couldn’t be more pleased. Intrigue, danger, and a beautiful woman in distress—just what he needs.

IN HOTTER WATER…
Raised thousands of miles from England, Thalia Burgess is no typical Victorian lady. A good thing, because a proper lady would have no hope of recovering the priceless magical artifact Thalia is after. Huntley’s assistance might come in handy, though she has to keep him in the dark. But this distractingly handsome soldier isn’t easy to deceive…


I would like this book WAY better if it wasn't attempting to be a historical fantasy.  From what I can tell it is not intended as alternative history, and that causes most of my issues with this book.  It's just too anachronistic.  The language is incredibly modern, except perhaps for some of the oaths used, and beyond a nod to how proper gentlemen and ladies are supposed to act, very modern in terms of action and thought.  And of course the villain wants to have his dastardly way with the heroine against her will, in the middle of combat.  Seriously?  As a woman I do very much get the fear and threat of sexual assault, I'm also getting tired of it as a regular peril.  I'm not going to expound on the idiocy involved in trying to rape a woman in the middle of an active battlefield with giant monsters threatening and improvised flame throwers in use.

Now, if this entire story was taken and put fully in a fantasy world the whole anachronistic conflict that bothers me would largely be fixed.  Some details would still require a bit more suspension of belief than just fantasy alone, such as even a partial mastery of Shaolin Kung Fu in a month or two, but even then the story would work better.

Going beyond my pet peeves this wasn't a bad novel.  Archer actually bothered to try and build chemistry between the love interests instead of relying on the magical mojo of instantaneous true love.  There are no great surprises or risks taken in the story development or arc, but it progresses cleanly through time and events.  Thalia is a very self-determined character, and she keeps that self-determination through the growth of her relationship with Gabriel.  Gabriel is a strong lead without becoming an overbearing alpha male.  The sex scenes even manage to avoid wildly over the top ridiculous sexual similes and metaphors.  I actually may read further in this series, but I should not read them if I've read other romance novels recently as to regain my tolerance for the foibles of the genre.
book review